Sparklers are a group of LED drummers that will seriously excite your guests! These sparkling LED drummers will make a huge impact at any corporate event or private function as they have a unique look and sound fantastic. Sparklers have been amazing audiences, with their LED drum shows all over the world and now you can hire them for your event.

Sparklers is a LED drum show performed by seven characters that combines high-impact drumming, dynamic choreography and beautiful lighting design. The performance incorporates static set-pieces, movement between sites and audience interaction. The LED drummers constantly shift the focal point of the show and sometimes surround the audience completely so they feel immersed in the drama which unfolds. The show gradually builds in intensity culminating in a huge climax of light, sound, smoke and movement.

Sparklers is a very engaging and flexible show that works brilliantly outdoors and indoors. The LED drummers are stunning by night and magical by day and works well from small-scale venues up to large town squares. It is perfect for corporate events and product launches and can be easily branded to the client’s colours. It also features amazing music and movement and is ideal for international audiences and an optional pyrotechnic finale can be offered.

Location
Sparklers is a highly adaptable medium scale show which has been designed to work in a number of different settings. The show will work as a site specific static piece and as a moving performance. It will typically be performed as a combination of both. Listed below are our requirements for several different settings. If these do not fit with your vision then please contact us to discuss your specific requirements.

Street Theatre
A large open, traffic free area like a pedestrian street, town square, marketplace or park. The LED drummers can work across and move between multiple sites in such an area. The minimum space for a static performance in the street is 10m x 10m but the ideal space would be 15m x 15m. Whilst moving between performance sites Sparklers will adapt to the space available, e.g. the group can move in single file down a path or pavement or spread out to fill a wide road. Sparklers is a loud rhythmic performance so do not situate the show close to other acts.

In a Parade
In a carnival parade, the LED drummers should not be placed near to other musical acts in the parade. The ideal space would be 5m width by 10m length. The configuration of the LED drummers can be adapted to suit the available road width and space between groups. During the parade Spark! will adapt to the space available, e.g the group can move in single file down a path or pavement or spread out to fill a wide road.

On Stage
This applies to indoor or outdoor events. The minimum stage size needs to be 5m deep x 12m wide with step or ramp access. The show is appropriate for international audiences of all ages. Audience numbers are limited only by the physical environment in which the show is performed and variables such as the height of staging.

Daylight & Night Time Shows
Daylight Show:
During daylight hours Sparklers is a beautiful and dynamic show with the performers’ costumes capturing and reflecting every bit of ambient light and colour.

Night Time Show:
The high powered lights which are built into the costumes and drums will look most effective after dark (or indoors). Night time shows should be scheduled no earlier
than sunset time on the day of the performance. Street lights will not impact the LED drummers performance.

For maximum impact Sparklers recommend booking a daytime and a night time performance. The LED drummers musical repertoire is made up of original percussive music written specifically for the show.

Standard Length of Performance:
On the street: the LED drummers can perform up to 70 minutes combining site specific static performances and movement between performance sites.

In a parade: the LED drummers can perform up to 90 minutes.

On stage: the LED drummers can perform up to 20 minutes. A stage performance will work well as the finale to a parade or street performance or can be performed as a standalone piece.

A minimum of 1 hour break between each show will be needed an,d a maximum of 2 shows per day.
Warm up and setup time for the the LED drummers can perform is 3.5 hours and set down is 75 minutes.

Requirements:
Stewarding
The LED drummers will need a minimum of 2 stewards to accompany the group during the show, and during any movement between performance sites. The Sparklers performance involves a lot of movement in which the audience are required to move and the responsibility of the stewards will be to ensure that the audience are a safe distance from the group at all times. This includes preventing audience members from wandering between the performers and shepherding the audience as the performers move. It is the responsibility of the event organisers to supply enough stewards for the projected number of audience members.

★ Will seriously excite your guests 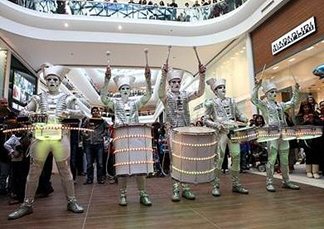 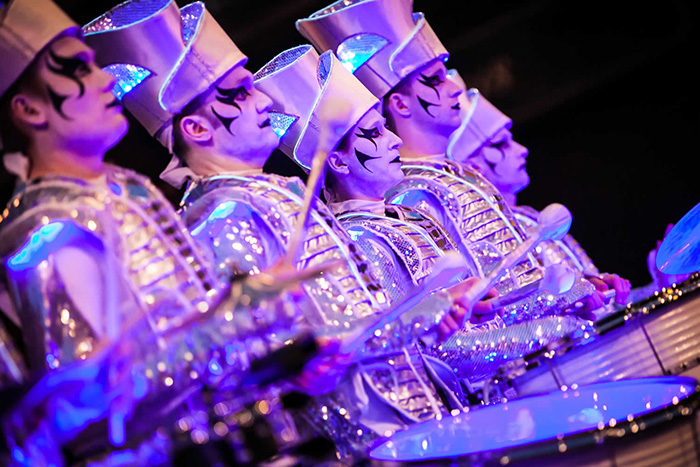 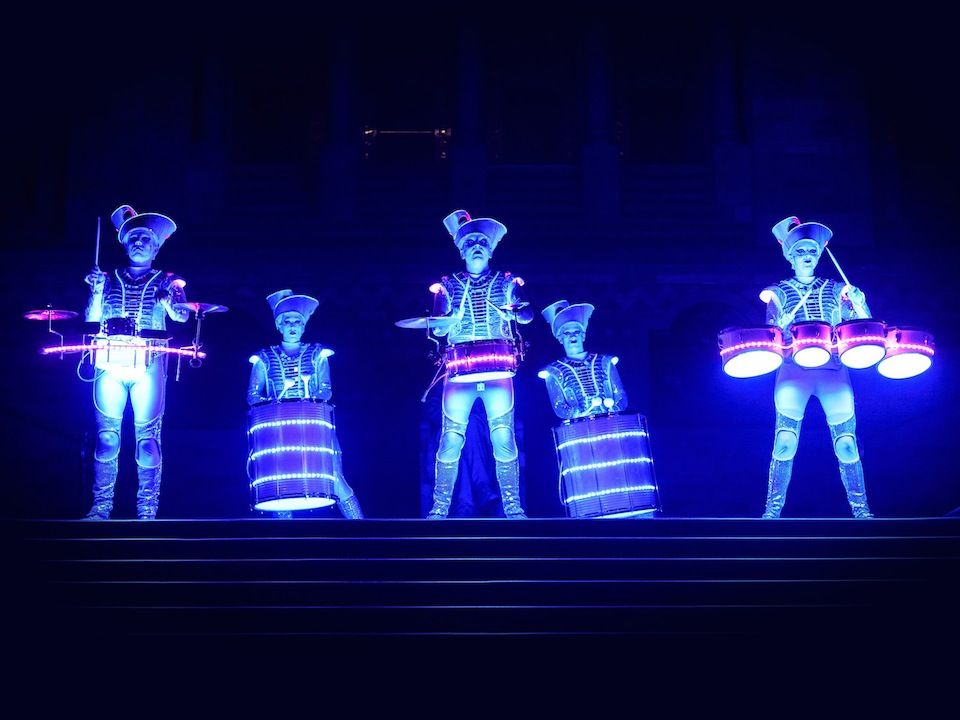 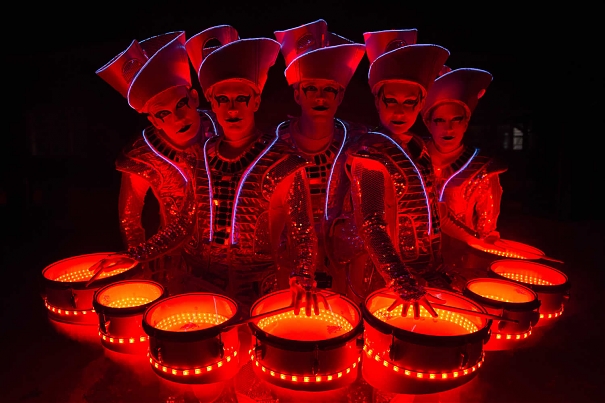 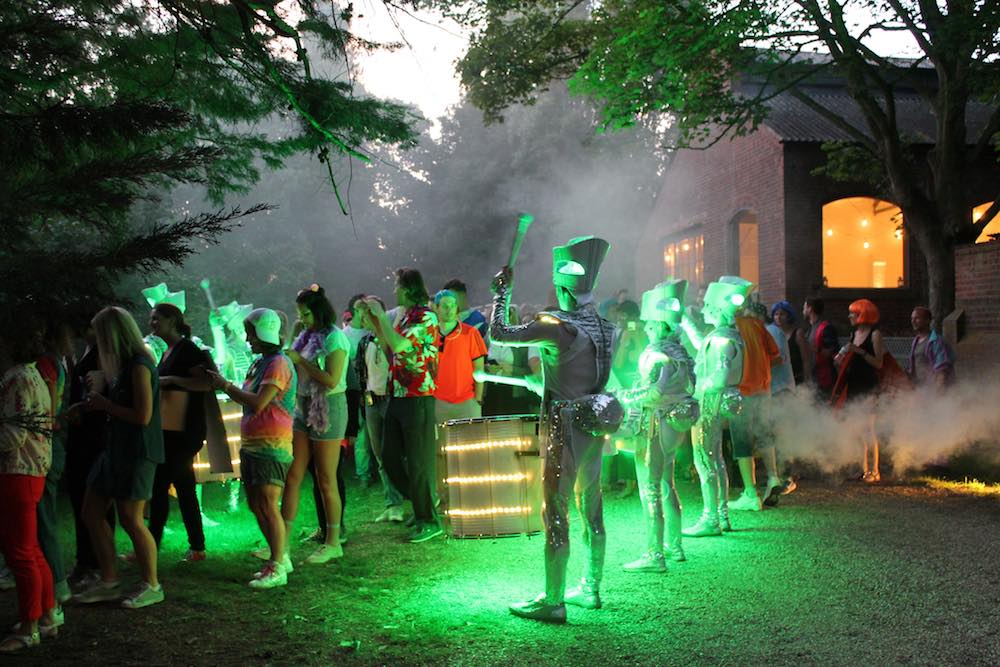 These LED drummers were all fantastic and really nice people. We will definitely be looking to book both again… Thank you for all of your assistance with the event.
WRP Ltd (via Contraband)

Last night went very well, thanks. Both acts were great – turned up on time, easy to work with and really entertained the audience. Sparklers especially had a real wow factor. We’re getting excellent feedback from our guests about both acts… Please pass on my thanks to Sparklers, and thanks to you as well!
William Reed Business Media (via Contraband)

Check out other Musical Shows and LED Performers