Chic Featuring Nile Rodgers is available to book for your special event – we work in direct association with Chic Featuring Nile Rodgers’s representative as a booking agent for them. Nile Gregory Rodgers is an American musician, composer, arranger, and guitarist, and is considered one of the most influential music producers in the history of popular music. Rodgers began his career as a session guitarist in New York, touring with the Sesame Street band in his teens, and then working in the house band at Harlem’s world famous Apollo Theater – playing behind Screaming Jay Hawkins, Maxine Brown, Aretha Franklin, Ben E. King, Betty Wright, Earl Lewis and the Channels, Parliament Funkadelic, and many other legendary R&B artists.

Chic was formed in 1977. Between gigs they recorded their first album with their then boss Luther Vandross. Luther provided the background vocals on the group’s early recordings. The band scored numerous top ten hits and helped propel Disco to new levels of popularity. CHIC’s chart-topping songs “Le Freak,” “I Want Your Love,” “Everybody Dance,” “Dance, Dance, Dance,” “My Forbidden Lover,” and “Good Times” have become Club/Pop/R&B standards. “Le Freak” is Atlantic Records’ only triple platinum selling single and “Good Times” shot to the #1 spot in spite of the Disco Sucks backlash in 1979.

The success of CHIC’s first singles led Atlantic to offer Rodgers and Edwards the opportunity to produce any act on its roster. They chose Sister Sledge, and the rest is history. The 1978 album, We Are Family, peaked at #3 and remained on the charts well into 1979. The first two singles, “He’s The Greatest Dancer” and the title cut “We Are Family” both reached #1 on the R&B chart, and #6 and #2, respectively on the Pop chart. “He’s The Greatest Dancer” was sampled in 1998 to create Will Smith’s “Gettin’ Jiggy Wit It,” which was #1 Pop for three weeks. As The CHIC Organization’s tight sound became increasingly sought-after, Rodgers and Edwards began record production with numerous artists – sometimes together, sometimes apart.

The 80’s were unquestionably Rodgers and Edwards’ most successful decade commercially. In 1980 they wrote and produced the album Diana for Diana Ross, yielding the smash hits “Upside Down” and “I’m Coming Out.” CHIC’s song “Good Times” played a pivotal role in the explosion of Hip Hop music, as an interpolation of the song’s bass-line and the record’s string-section sample, was the bedrock of The Sugarhill Gang’s “A Rapper’s Delight” – the first multiple-platinum Hip Hop single. Edwards’ infectious bass-line also influenced Queen’s largest selling single – the1980 hit “Another One Bites The Dust”. The CHIC Organization produced the smash hit “Spacer” for French Pop artist Sheila and B. Devotion and Deborah Harry’s solo album Koo Koo.

CHIC dissolved in 1983 after its final contractual Atlantic album, Believer and Soup For One (a film soundtrack). At that time Rodgers began a solo career producing his first album Adventures in the Land of the Good Groove. Rodgers then produced David Bowie’s biggest selling album Let’s Dance with several hit singles including “China Girl”, “Modern Love” and the title track, “Let’s Dance”. He produced the single “Original Sin” by INXS, which led to Duran Duran. They worked extensively with Rodgers after he co-produced their largest selling hit single, “The Reflex” in 1983 and followed it up with “The Wild Boys” on their 1984 live album Arena.

That same year he produced Madonna’s blockbuster album Like a Virgin, spawning her two signature hits “Material Girl” and the album’s title track, “Like a Virgin”. He also joined Robert Plant’s platinum selling studio band The Honeydrippers, on the album The Honeydrippers: Volume One. This period sparked Rodgers’ interest in soundtracks. The first of which was Alphabet City, Gremlins (“Out Out” – Peter Gabriel) Against All Odds (“Walk Through the Fire” – Peter Gabriel), That’s Dancing (“Invitation to Dance” – Kim Carnes), White Nights (numerous songs) and The Fly (“Help Me” – Bryan Ferry).
In 1985 Rodgers produced albums for Sheena Easton, Jeff Beck, The Thompson Twins, Mick Jagger, and many others, while still finding time to perform at Live Aid. He was awarded #1 Singles Producer In the World in Billboard magazine to close out the year.

In 1986, he produced Duran Duran’s Notorious album, which yielded a #2 title track hit, “Notorious”. During a live set, Simon Le Bon introduced Rodgers by saying, “Well, this band went through a difficult time and it might not have made it if it weren’t for this gentleman.” Rodgers contributed to numerous other projects and appearances with members of the band throughout the 1980s. He also produced albums for Grace Jones, Earth Wind and Fire’s vocalist Phillip Bailey and Al Jarreau. Rodgers performed on “Higher Love” with Steve Winwood, and records for Cyndi Lauper, Howard Jones, and David Sanborn. He then worked with Peter Gabriel on yet another soundtrack project, Laurie Anderson’s Home of the Brave. Rodgers formed the short-lived experimental band Outloud in 1987, with David Letterman’s guitarist, composer and vocalist, Felicia Collins, and acclaimed French session musician, producer, composer and keyboardist, Philippe Saisse; they released a single album, Out Loud, on Warner Bros.

In 1988 Rodgers composed his first orchestral soundtrack for the film Coming to America (the second highest grossing film of the year) starring Eddie Murphy. Rodgers followed this with soundtracks for White Hot (the world’s first Hi-Def feature motion picture), and Earth Girls Are Easy. The latter would pair him with The B-52’s. In 1989 he co-produced their comeback multi-platinum album Cosmic Thing, which had the hit singles “Love Shack,” “Roam,” “Cosmic Thing” and “Deadbeat Club.” That year he also produced Working Overtime, Diana Ross’ return to Motown, a deal that scored her an executive position at the label, along with releases by The Dan Reed Network, Slam, and Duran Duran’s compilation, Decade: Greatest Hits, which was appropriately titled. It was the biggest music-selling decade of Rodgers’ life, as well as many of the artists he worked with.

In 1996, Rodgers was honoured as the JT Super Producer of the year. He performed with Edwards, Sister Sledge, Steve Winwood, Simon Le Bon and Slash in a series of commemorative concerts in Japan, which provided a career retrospective.

He started playing live concerts again while composing and producing music for film soundtracks; Beverly Hills Cop 3, Blue Chips, The Flintstones and Feeling Minnesota (working with Bob Dylan) to name but a few.

Its titles include the complete Halo and Resident Evil franchises and other well-known Triple-A game soundtracks like Gears of War and Borderlands.

Rodgers received the National Academy of Recording Arts (NARAS) and Sciences NY Chapter’s Governor’s Lifetime Achievement Award and the Heroes Award. On September 19, 2005 he was honoured at the Dance Music Hall of Fame in New York when he was inducted for his many outstanding achievements as a producer, along with former fellow band mate Bernard Edwards. CHIC has been nominated to the Rock & Roll Hall of Fame six times – 2003, 2006, 2007, 2008, 2010 and 2011. 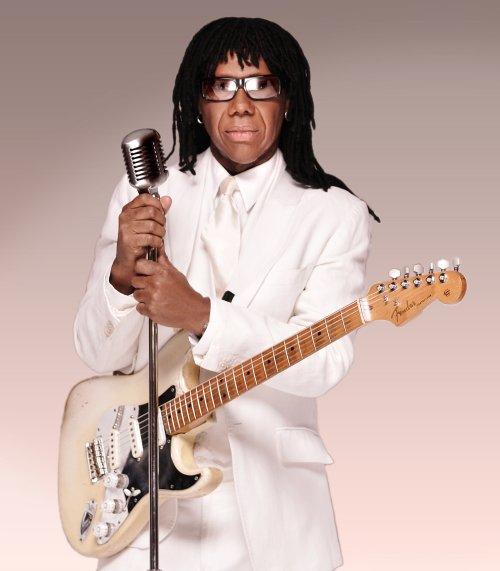 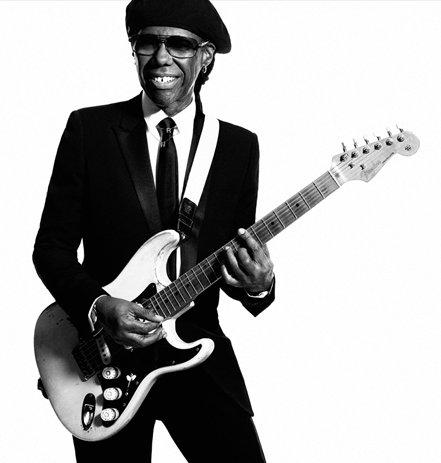 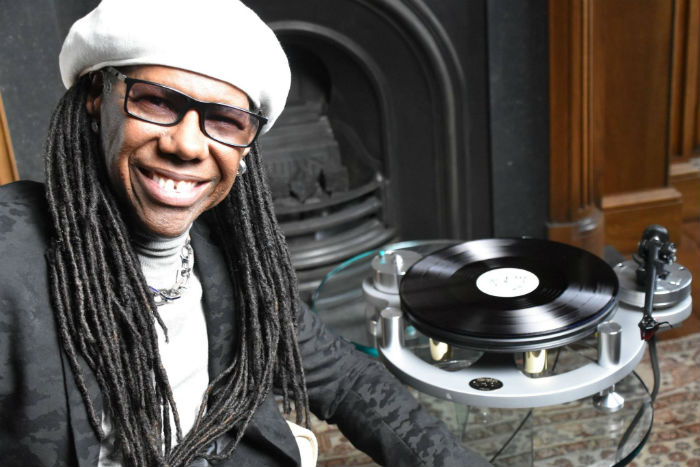 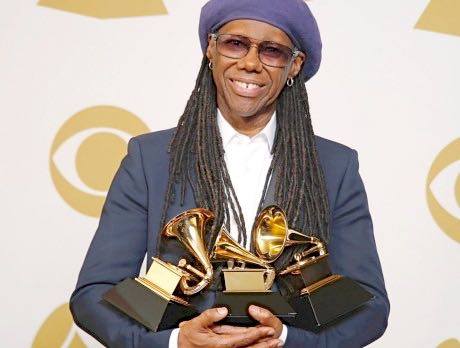 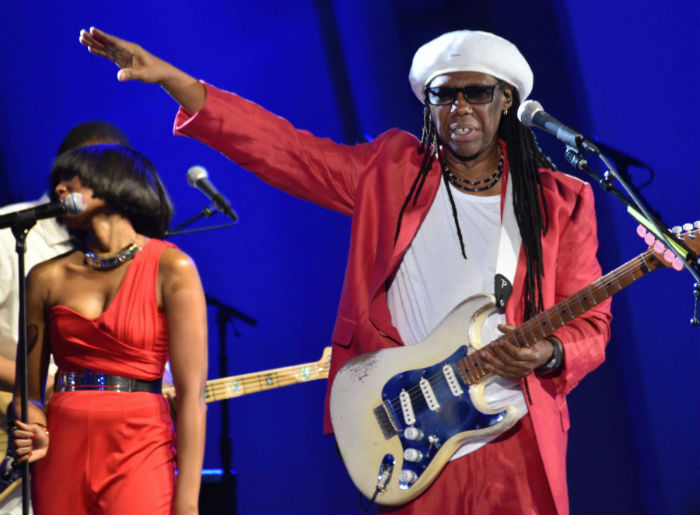 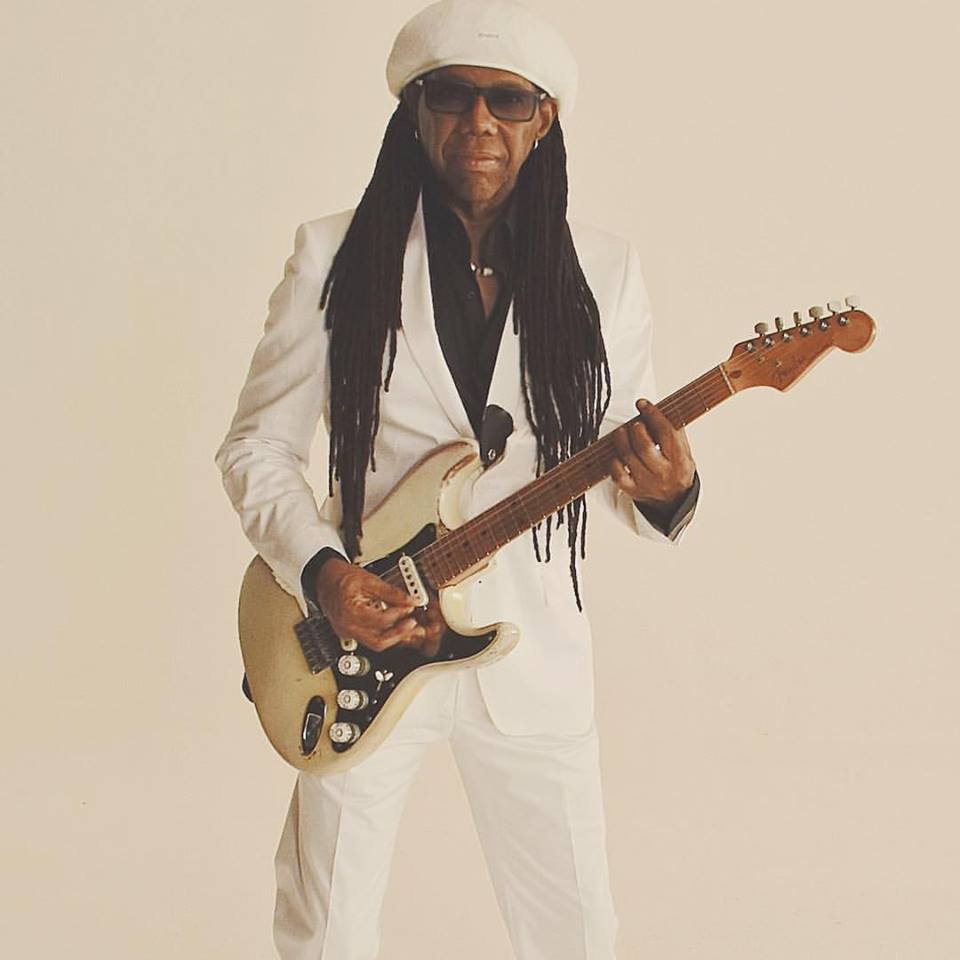