The Hedge Men are one of the most original and fabulous walkabout acts in the business. Straight from the pages of a fairy story they burst into life! They walk, talk and create fits of laughter wherever they appear.

Looking exactly like the real thing they can stand perfectly still or can turn over a new leaf by wandering around a venue and joining in with the fun. Perfect as a meet-and-greet act they can welcome guests on arrival with a tree hug before escorting them into the party.

They can be accessorised to fit in with an event’s theme or style and like nothing better than to wear flashing fairy lights at Christmas time. Let them take root at your event and watch the laughter grow!

The Hedge Men can only go out as a pair and can’t be booked on their own.

Technical Requirements:
The Hedge Men are only available as a pair. They struggle to see in the dark so might need a chaperone in very low lighting. Not suitable for children’s events unless accompanied by security/chaperones as kids like to pull their foliage off.

Standard Length of Performance:
The Hedge Men perform single stands for a maximum of 60 minutes. If spread through an entire day, they can perform a maximum of 4 x 40 minutes sets.

Our Artist Spotlight feature is where we focus on one of our performers, giving you the chance to find out more about the people behind the performances, and offering an insight into the world of entertainment bookings. Here’s our Artist Spotlight on The Hedge Men – Human Statues:

“I’m officially unsuitable for normal work. I had a proper job for a few years in a theatre and would get so bored that I perfected the art of sitting at a desk asleep with a mouse in my hand ready to spring into action should anyone by chance come into the office (which rarely happened)”.

“I opted to make a living out of doing nothing so packed my bags and headed to London to become a busking Human Statue and the Hedge Men were a natural extension of that I learned everything I know on the street in covent Garden as a busker. I did some drama training but I didn’t train at all in mime or street performance”.

“I always say the street is the best learning ground for this sort of work because if you’re no good nobody gives you money. Money is a great incentive to get better at what you do – the more you perform, the better you get and the more money you make.”

“I’ve worked in theatres and with all sorts of artists and I can honestly say that some of the most talented and gifted performers I’ve ever known are street performers The nature of their art makes them so precise yet be able to appear spontaneous which vitally is important for a crowd. The Hedge man have met many celebs, including Royalty!”…

“The events industry is often indoors so it can be much warmer than performing on the street. Plus you get to go to some fabulously exotic places and encounter wonderfully daft situations.We always laugh about how we don’t know what is going to come next”.

“I remember once missing my connecting train back from a gig somewhere and having to sleep rough in a freezing Stevenage train station, a few days later I was sipping cocktails after a job on Miami Beach. I don’t think you can get two more opposite situations”.

“If I had to give a piece of advice to somebody who wanted to get into my line of work, I would be: don’t copy anyone and don’t do it if you don’t enjoy it. Audiences are very savvy and if you’re having a miserable time they’ll pick up on that and they won’t like it”.

“My best event for Contraband was when The Hedge Man did a funny mini music festival at a shopping centre in Farnborough last year. We were up to our normal antics whilst one of the bands was playing and amongst the crowd we noticed a few (ahem) slightly too mature ladies in hot pants twerking and waving their bits about”.

“We imitated their wobbling’s in what we thought was an amusing manner before one of the singers on stage leapt off to grab us and take us up on stage. On closer inspection it turned out the band were two members of 90’s heartthrobs East 17 and we had been twerking with their hard core supporters”.

“When a thousand of them rushed at us for photos the Wembley security guards had a little panic and we were ushered out of the stadium and received a severe ticking off – it was worth it though”.

“My worst experience was being called a loser by a kid”!

“We like slapstick, especially the old stuff like Laurel and Hardy, Harold Lloyd and Chaplin. All those movies are a guidebook for mime and comedy”.

“I love the big street theatre companies like Royal de Luxe, Plasticiens Volant’s, Compagnie Off and a hundred others. They show us that anything is possible and that the street can be as great a stage as any theatre of opera house. It’s very tricky to have a family or social life around what we do. It’s hard to make plans because a gig comes in and you’re off. I think I have to learn to say no more often as being away all the time can be a big strain on the personal life”.

“I’d do away with all late payers and cheap agents. Some people expect us to work for nothing in return for ‘exposure’ which always receives a solid F.O. If we needed exposure they wouldn’t have been able to find us in the first place. Contraband is always lovely though and pays very well and on time (just covering my back here)”.

“I’d love to do more walkabout acts,The Hedge Man are so fun to perform and we’ve built some really fun and cheeky characters with them. I’d like to grow them into one of a collection of monsters and beasties that visit events and cause a bit of chaos. Hopefully I’ll get the time to actually create them rather than just dream endlessly about it”.

★ One of the most original and fabulous walkabout acts

★ Create fits of laughter wherever they appear 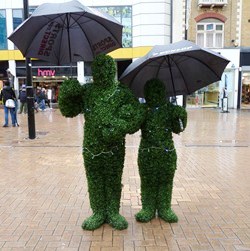 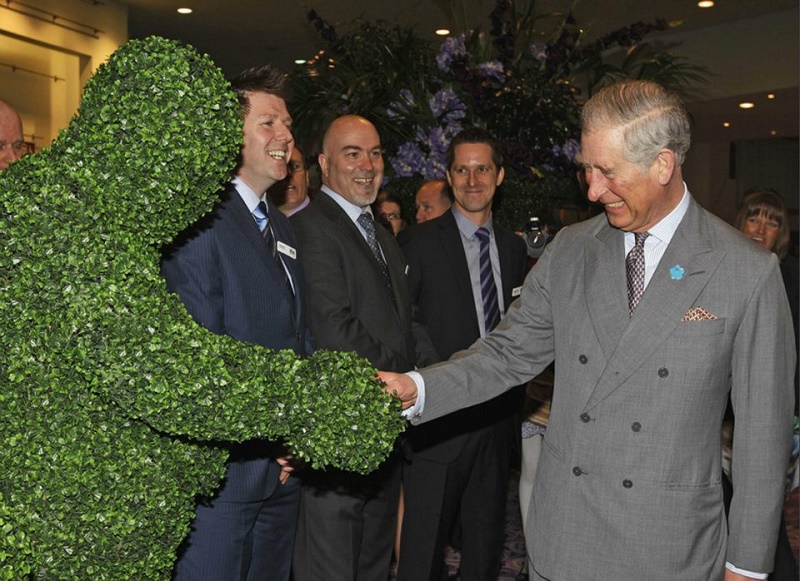 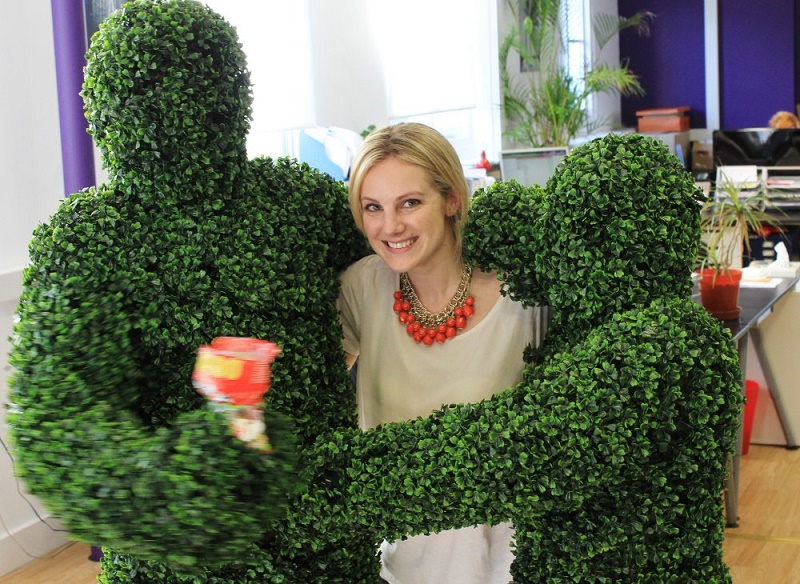 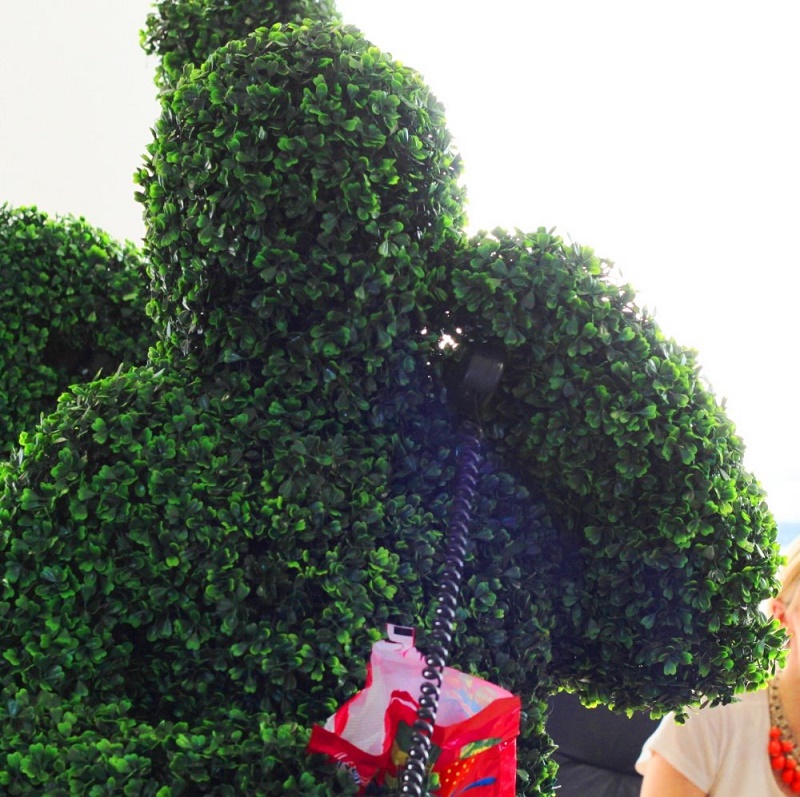 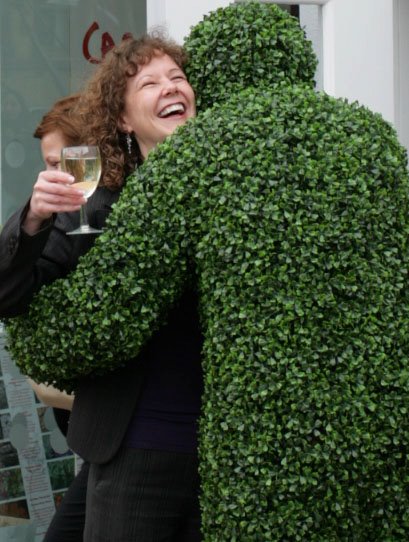 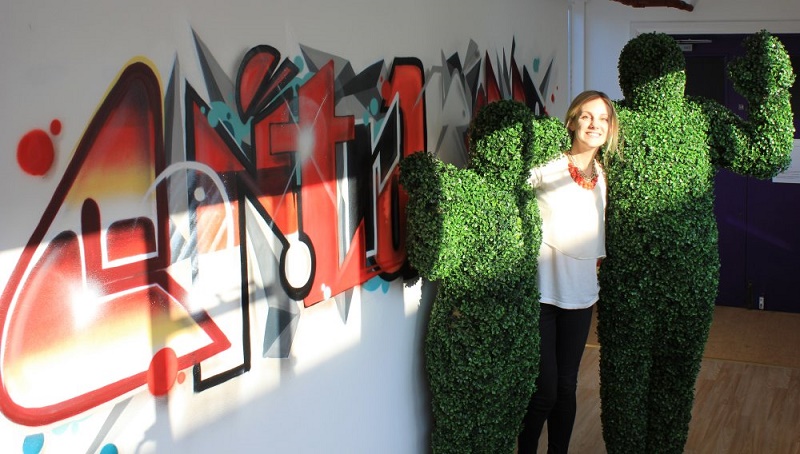 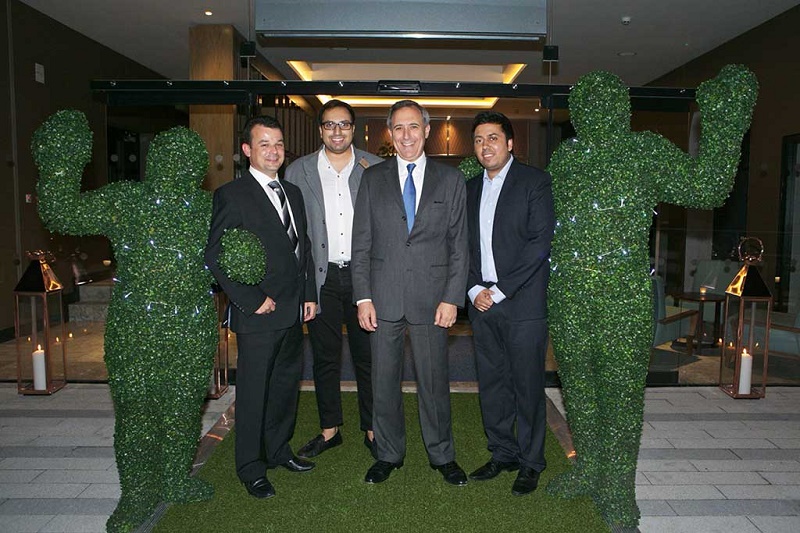 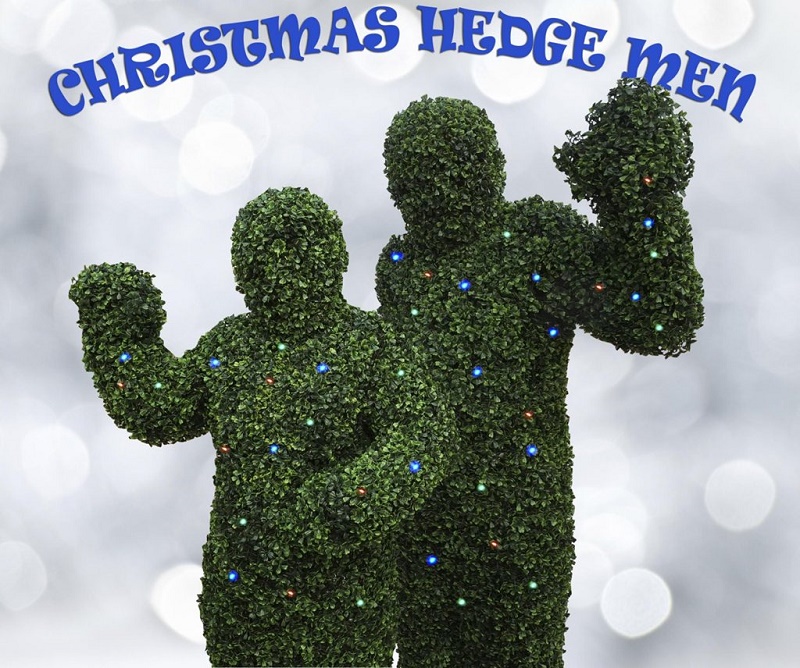 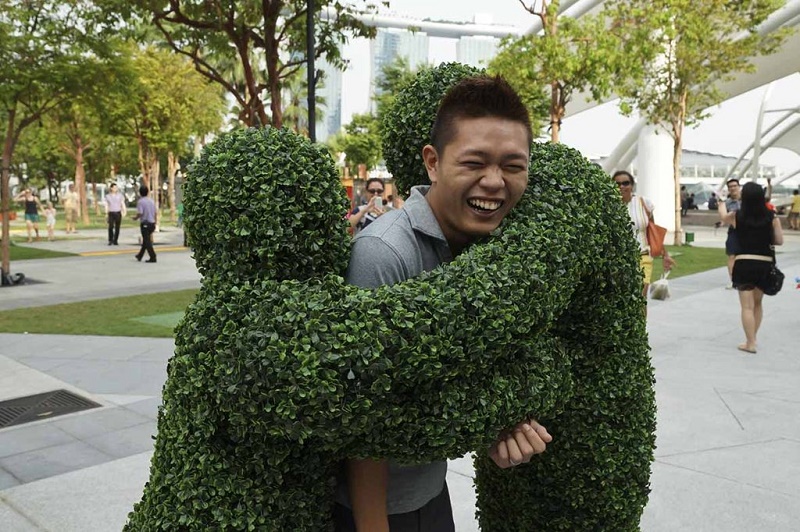 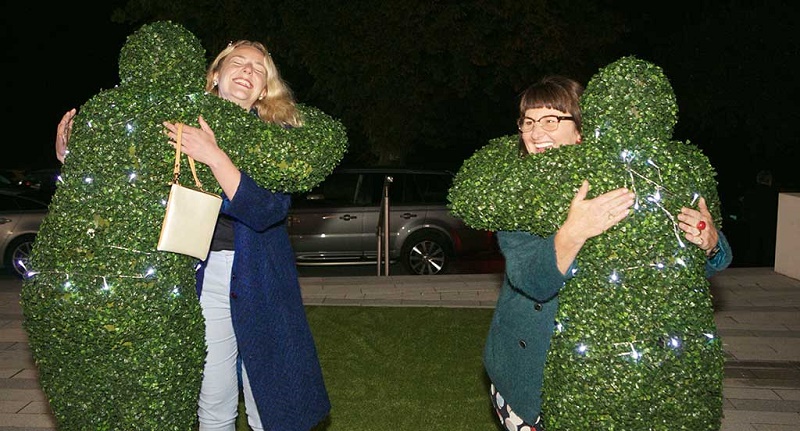 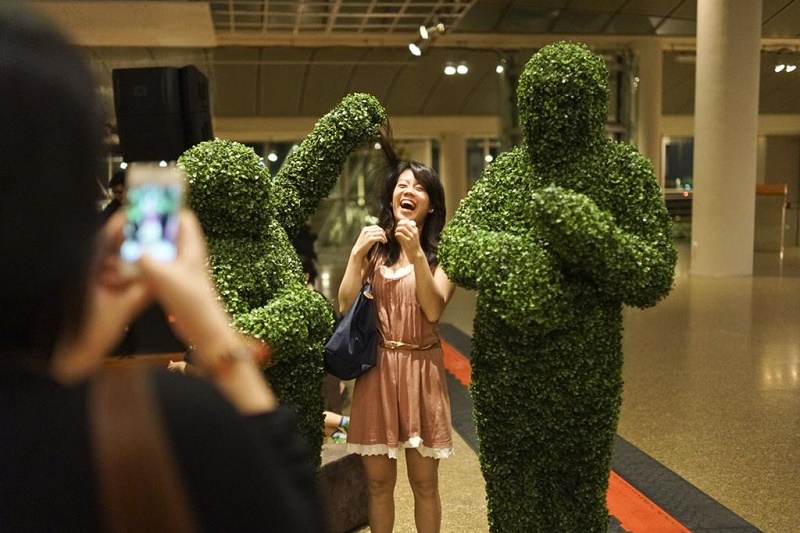 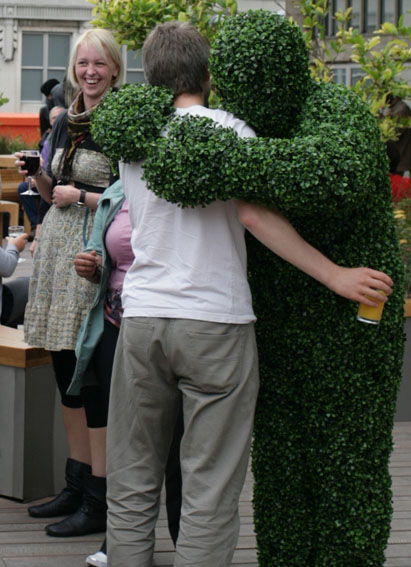 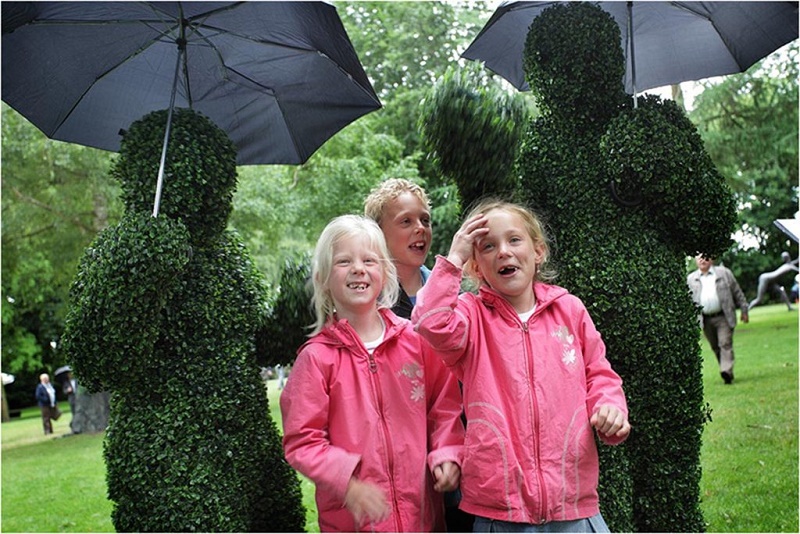 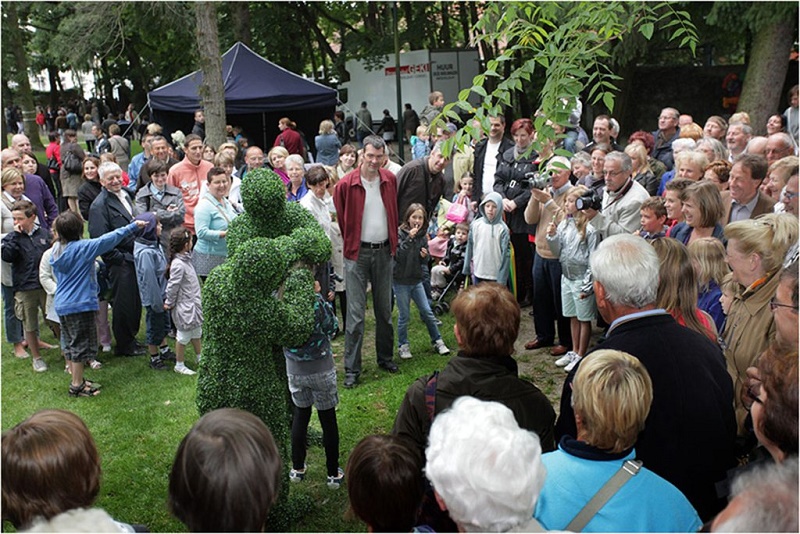 My dad mentioned how good he thought the hotel’s human-shaped hedge was, the next thing he knew, it was sitting on his knee!
Private Client

Brilliant as always, we love working with you guys
Virgin Atlantic

My three-year-old calls you ‘My Walking Trees’ so clearly you’ve been adopted, thanks again!
The Law Society

You were the highlight of the night and everyone is talking about you! We particularly loved that you had your picture taken in the photo booth! Thanks for entering into the spirit of the night!
Private Client

Thank you! You were both brilliant and I’ll definitely try and squeeze you into our next event!
Nokia

A huge thank you for making ‘The House of Illusions’ tent at this year’s Pop Up Festival one of the star attractions. Your presence was like a magnet. Heaven knows how many people went home with stories and photos of ‘Mr. Hedge’. Adults and children alike were entranced, amused and in awe in equal measure. And the organisers were delighted. You made a special day even more so.
Pop Up Children’s Book Festival

They were absolutely fantastic and please pass on our thanks to them, they were hilarious and a big hit.
LandAid Functions Ltd (via Contraband)

Thank you all for hard work in making our Summer Ball here at Lensbury on Friday evening a success. We have received many positive comments as feedback, and with great comments with regards to the entertainment supplied on the evening.
Lensbury Ltd (via Contraband)

Just to say thank you very much for all your help in securing the acts for us on Saturday…The Hedgemen went down a great storm…Many thanks for your patience and perseverance in getting us acts that were a little bit different and fun!
Officers Mess C/o Aramark Ltd (via Contraband)

Yes, everything went very very well and the acts were great! Thanks so much for all your help, will look forward to working with you again in the future.
VS Creative Ltd (via Contraband)

I would like to thank you for your assistance and help with my Boss’s party preparation. All Contraband acts performed incredibly well and showed the high level of professionalism. Once again many thanks and I hope to work with you in the future.
ALM Services UK Ltd (via Contraband)

I just wanted to say a huge thank you to everyone at The Meads for making yesterday such a fantastic day. We’ve had great feedback on Facebook with our Reach going up by 559.3%. All the acts were excellent….. Let’s hope the Centre decide to make this an annual event – the public certainly want them to!
Key Property Investments (No2) Ltd (via Contraband)

Thanks for your email! The event was extremely successful and much more than expected was raised for Marie Curie! All the entertainers were fabulous, please extend our thanks to them all!….
Atom Events Ltd (via Contraband)

….The event went really well and Angie, Anton and the Hedgemen were great! They got a lot of attention from the public and crowd and the costumes and acts were fantastic…..Thanks so much, they were a real asset to the event.
London Borough of Bromley (via Contraband)

…the event was a fantastic success and the hedge men went down really well! Please do pass on our thanks to them as I didn’t get to see them before they left. Thank you for your assistance pre event, we will certainly be in touch should we have any further enquiries.
Powwow Events Ltd (via Contraband)

The Hedge Men were hilarious, so funny, I was in hysterics, they were very mischievous.
First Direct (via Contraband)

I’m pleased to report that the event went really well. Everyone LOVED the hedgemen and the stilt walker… Pleasure working with you again.
Roselle Events Ltd (via Contraband)