The London Quartet has long been recognised to be one of Britain’s great vocal groups. Founded in Cambridge as a purely a cappella student group, it first came to prominence in the Tim Rice musical Blondel in London’s West End. Since then, it has appeared in a huge variety of venues round the world, singing an astonishing range of music. It has toured extensively from the United States to South Africa to Southeast Asia and the Far East.

The ensemble has recorded seventeen albums, and has sung in the most prominent venues for the most prestigious clientèle, including Buckingham Palace for Her Majesty the Queen. They have presented their programme in French, German, Italian, Castilian, Catalan, Estonian, Greek, Turkish, Romanian, Portuguese, Flemish, Korean, Russian, Flemish and Latvian.

Aside from its concert work, The London Quartet is much in demand for its hilarious bespoke entertainments with specially-written material. Recent notable commissions, corporate and private performances include composing a birthday tribute to the partner of one of the UK’s wealthiest men, on a bill with the legendary Diana Ross, singing in the presence of the Queen of the Netherlands and a crowd of two thousand at the naming ceremony of the Eurodam, one of the world’s largest cruise ships, entertaining a castle shooting party of fourteen guests held by a leading Formula 1™ boss, and writing a special Christmas number for BBC Radio 5 Live

Standard Length of Performance:
2 x 30 – 45 minute sets, can also provide sung grace at the start of a meal.

★ One of Britain’s great vocal groups

★ Sing an astonishing range of music

★ Will make your event memorable 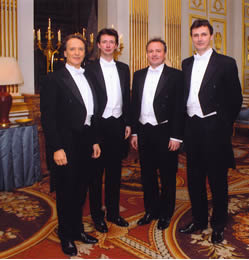 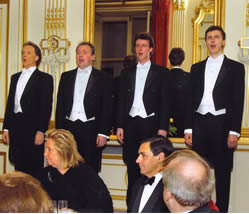 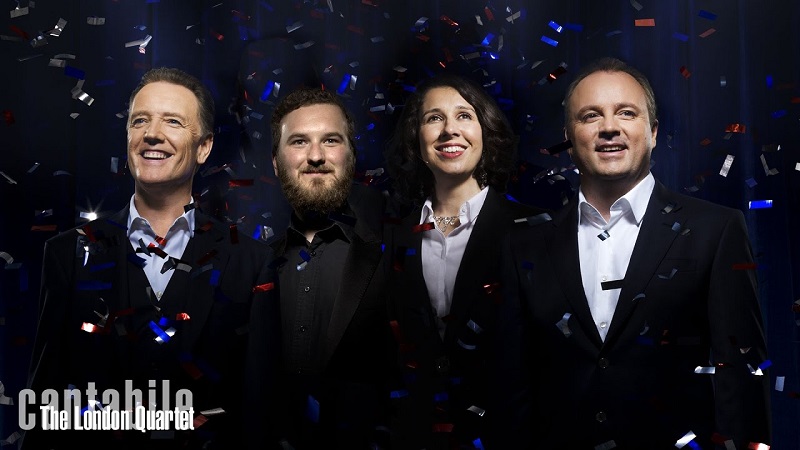 Thank you once again for your delightful contribution to our evening. All our guests thoroughly enjoyed your performance and still talk about it with pleasure!
L’Oreal

We would recommend Cantabile very highly to anyone wanting to add a humorous, memorable and musically professional element to an important event.
British Embassy, Paris

Video of The London Quartet