La La Hoopers provide a unique fusion of acro-balance, dance, hand balancing, contortion and hula-hooping as seen by millions on Britain’s Got Talent. They have a large repertoire of unforgettable acts and costumes from beach bathers to super heroes. You can also light up your event with their spectacular LED glow hula-hoops. These entertainers are world record holders, and will really impress guests at any corporate event.

La La Hoopers have also appeared on the 2008 Britain’s Got Talent show where their act wowed the judges and propelled them into the Live Semi-Finals where they were watched by millions of viewers across the UK!

Acts Available Include:
Santa’s Spectacular
This themed hoop extravaganza is perfect for Christmas celebrations. It is a trio acro-balance and hula hoop act performed to classic Christmas songs, with many original moves and comic touches. A high-energy, technically skilled, tongue-in-cheek number performed in cheeky Santa costumes.

Hula Heroes
As seen on the live semi-finals of Britain’s Got Talent 2008 this super hero themed act see La La Hooper’s transform from normal everyday people to the ‘Hula-heroes’ to save the day.

Fitness Fanatics
Drawing the fun of 80s fitness videos they have created a comic, upbeat and memorable act.

Bathing Beauties
Specially commissioned for the Cirque Bijou production ‘Sequins and Sawdust’, performed in Bristol and by the National Theatre on the South Bank. This 1920’s themed act takes you back in time to the seaside for a summer fun performance!

Over the last few months La La Hoopers have been hula-hooping at some of the most exciting and high profile events in the UK. They have been up and down the country with the Cadburys ‘Spots V. Stripes’ campaign, they brought cage fighter Alex Reid into the ring in style (with their LED glow hoops which are great for Christmas), and backed Diana Vickers’ new single on the X-factor live show, and even appeared on ITV’s ‘What Katie Did Next’! In addition La La Hoopers also attended the Coronation Street 50th anniversary party, where they performed a custom made act to celebrate the programs heritage, and taught some cast members to hula-hoop! You may also have them on Blue Peter this summer, where they broke a hula –hooping world record (their third!), and performed in stunning new orange air hostess outfits, created for a bespoke performance for Orange Business Services and Sita.

All this, as well as running their own full-length cabaret in the ‘Theatre Meadows’ in Farnham, which featured trapeze, hand-balancing, aerial silks, and the compering skills of the wonderful Mr Goronwy Thom. Alongside La La Hoopers trio acts, two of them also have second discipline solo acts in aerial hoop and hand-balancing, which is perfect for events with tight budgets that want multiple acts. They are also very happy to provide hula-hoop workshops and teaching, for all ages and levels of fitness and experience.

Performance requirements are floor space must be 4 meters deep by 6 meters wide by 4 meters height is ideal, but they can adjust for smaller spaces. 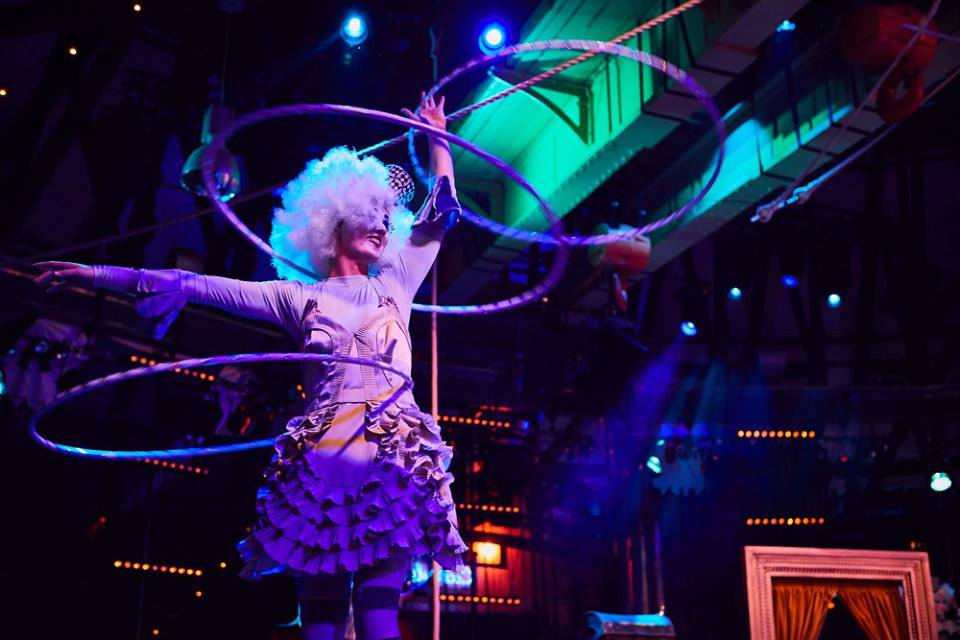 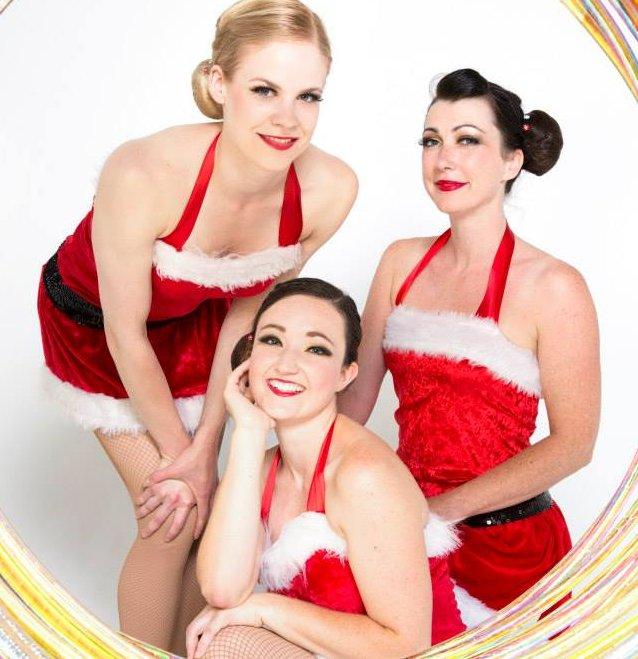 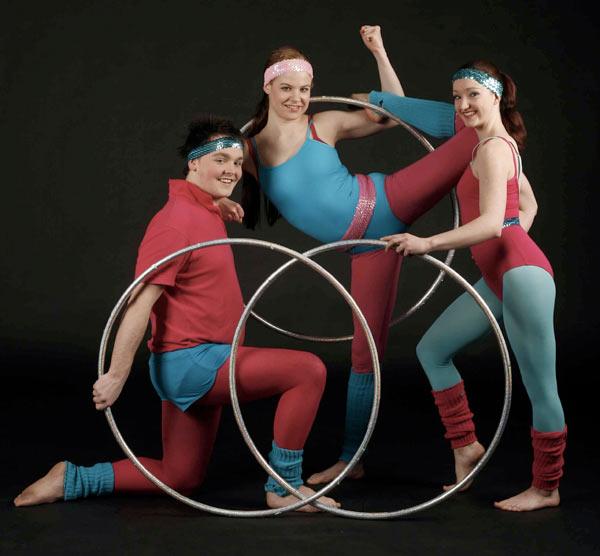 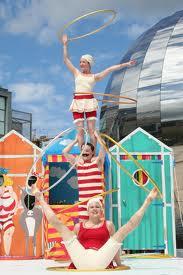 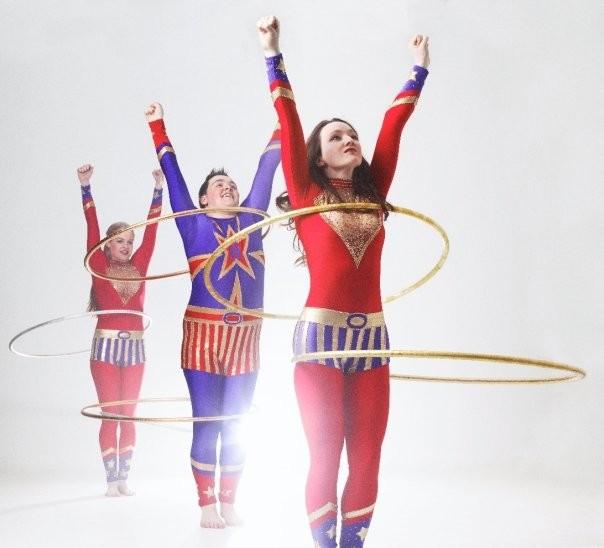 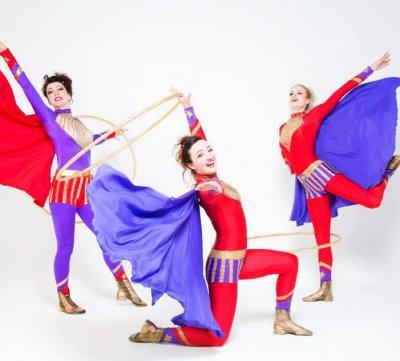 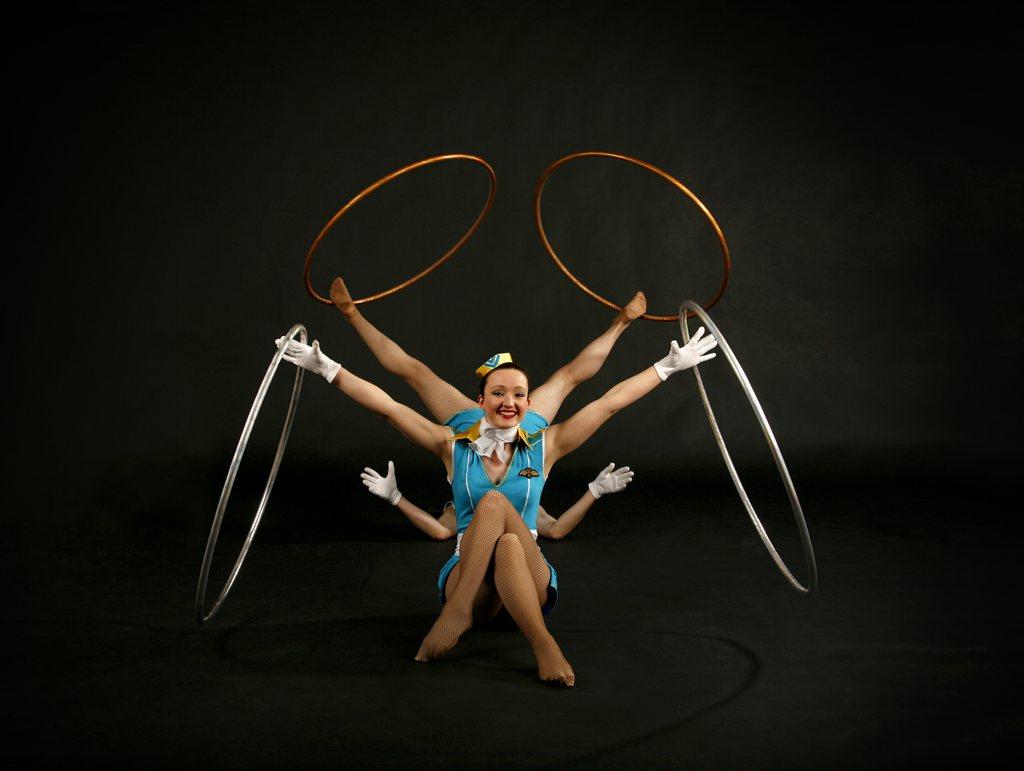 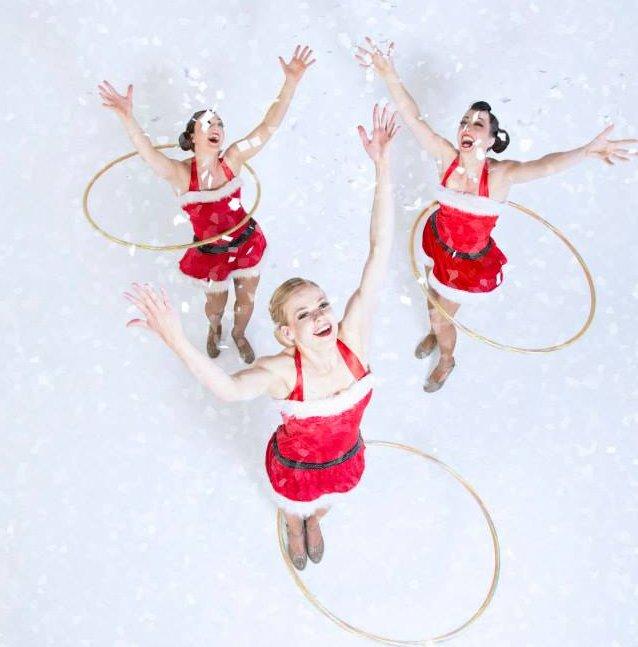 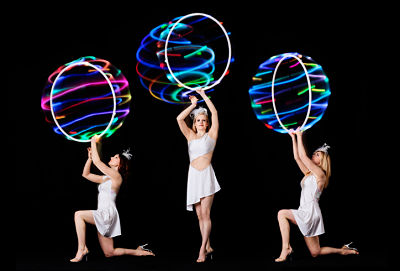 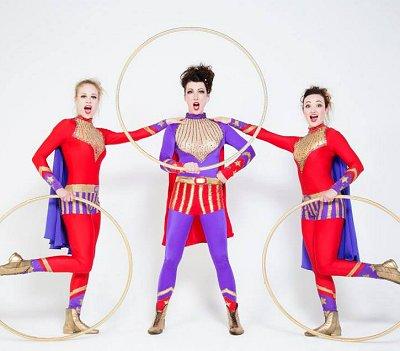 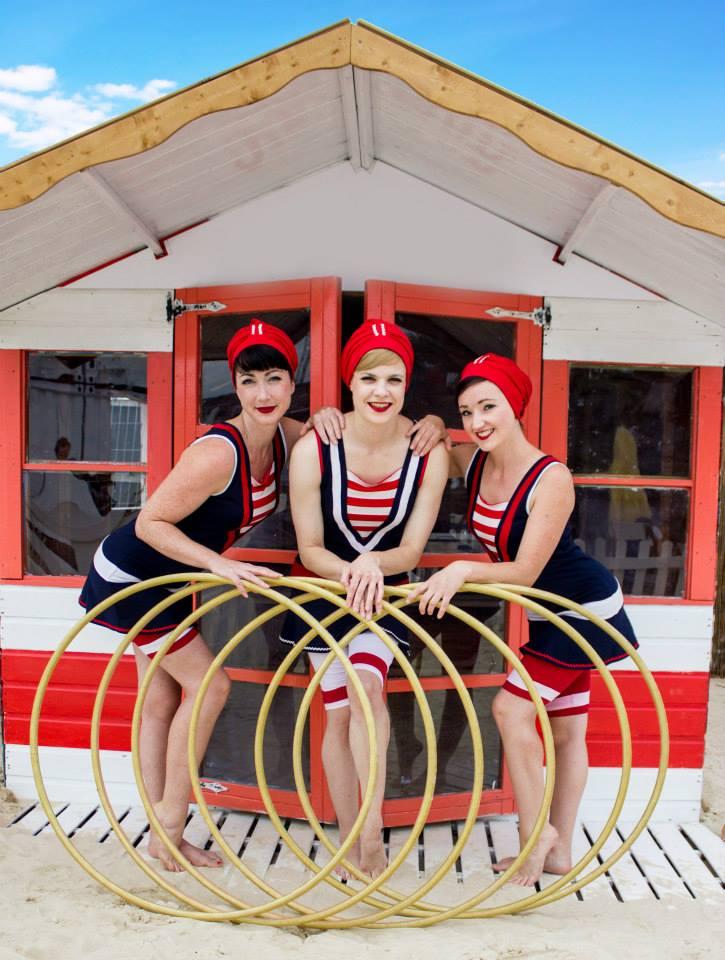 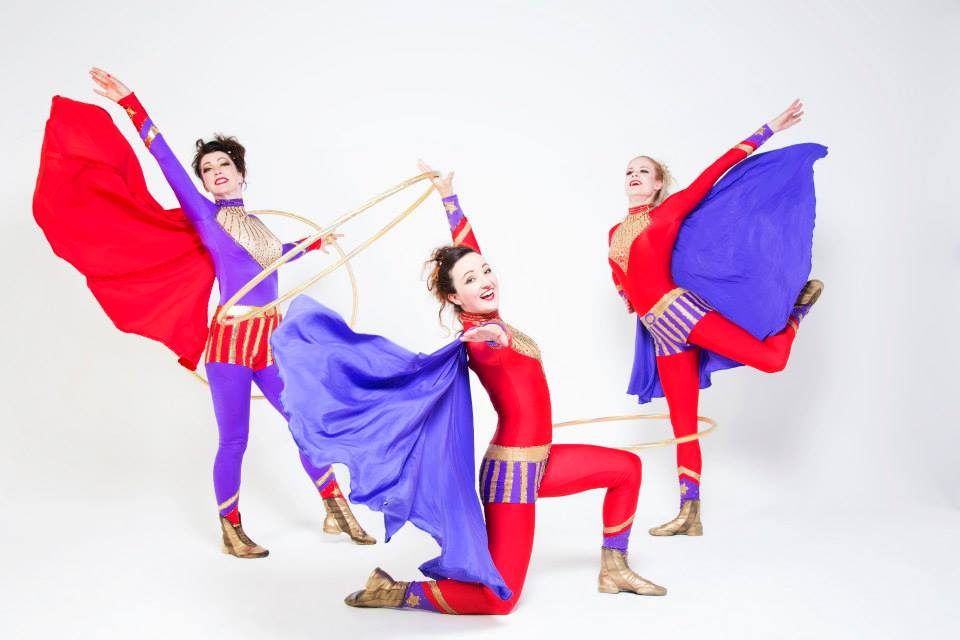 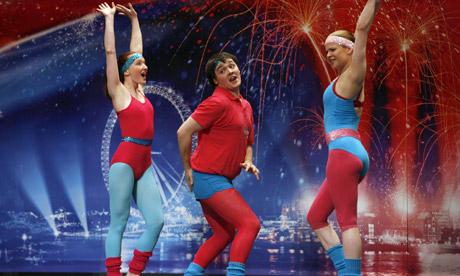 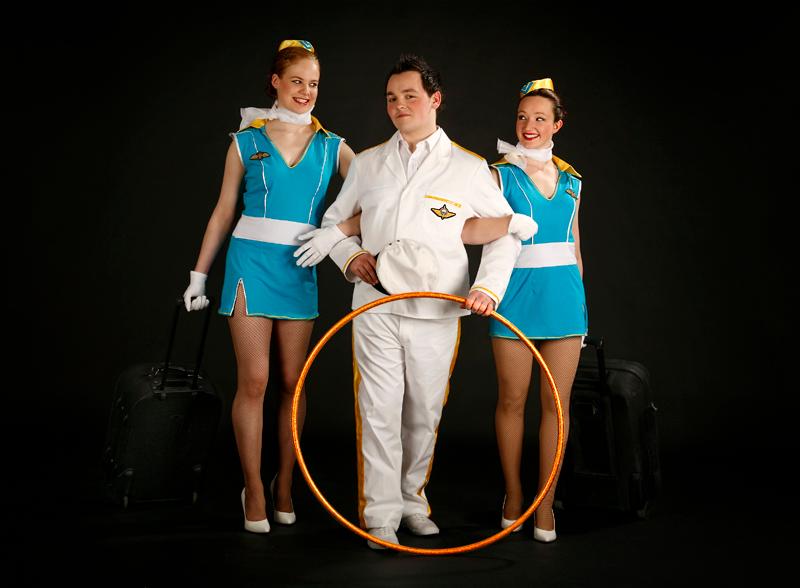 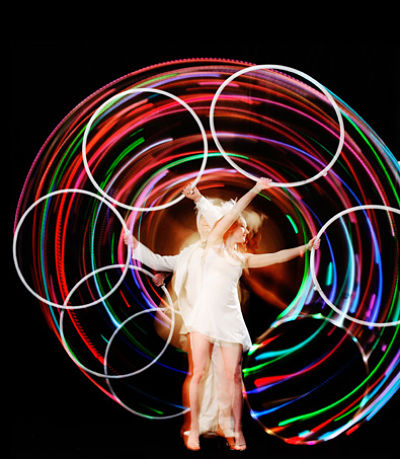 It’s just genius, you’re fantastic, you are my favourite act of the entire competition so far!
Amanda Holden

You won me over!
Simon Cowell

They are one of the best acts I have ever seen. Their infectious fun and high energy, coupled with well-practised skill, never fails to light up any audience; they bring the house down time after time!
Private Client

Thank you all so much for your fabulous work at the Harbour Festival – words that have been used to describe you as people are “professional, friendly, enthusiastic and accommodating” and as for your act – well FABULOUS can only suitably describe it and the clothes were fantastic!
Cirque Bijou

Thank you so much for all of your help in providing entertainers for our Best Dream Event on Friday. We have received outstanding feedback from everyone who attended and our client, it was such a great night! All of your acts were extremely professional and put on a fantastic show…they were all brilliant and fitted our theme and evening schedule just perfectly.
Yellow Fish Event Management (via Contraband)

They were so so great and perfect for the event. They were just so entertaining and really gave us our money’s worth. The guests crowded round to watch the performance and they really did get everyone dancing and clapping, after the La La Hoopers finished guests just poured onto the dancefloor. They were also really lovely to work with.
Lillingston Limited (via Contraband)

Hula Girls – Amazeballs!! You were spot on once again thank you, all acts were fantastic…
Zebra Events (via Contraband)