Empress Stah is a “Jerwood Circus Award” winning Trapeze Artist with over 12 years professional experience, and was one of the first artists this century to mix highly skilled aerial performance with burlesque style cabaret.

Empress Stah has been performing her unique brand of Neo Cabaret since 1998, she lives and works in London and travels abroad frequently. Stah devises and choreographs all her own work and has also produced full scale, touring cabaret events.

Aerial Acts Available Include:
The Chandelier Aerial Act
‘Swinging from the Chandelier’ is a phrase that conjures up images of the wildest and most extravagant parties. An ornate and sophisticated centre piece for the room, our chandelier boosts 18 lights that can be dimmed to create the perfect atmosphere.

Suspended on a lifting system, the Chandelier hangs in the room and appears to be a typical chandelier, until the moment when it begins to descend, the aerial apparatus is attached, the aerialist appears and is elegantly lifted up into position to execute a graceful and seductive aerial performance.

This act has added an air of decadence to some of the grandest venues in Europe including The Roundhouse, Harvey Nichols, Koko’s, The Hippodrome, Sketch & Glastonbury Festival. The Chandelier can be dressed to accommodate themes including Valentines with flowers and hearts, Winter and Xmas with stalactites, Halloween with cobwebs.

Ice Palace Aerial Act
Blue Lights and Snow adorn the Chandelier to create a magical, wintery ambience for Stah to perform an aerial hoop routine to Frozen by Madonna. The act begins with Stah entering with a flaming candelabra, she eats the fire before beginning the aerial act.
This can be performed without The Chandelier.
Duration: 7 min

The Constellation – Eternal Night Aerial Act
The Constellation is Empress Stah’s brand new aerial prop, inspired by her ambition to perform in zero gravity. Creating the illusion that Stah is indeed floating around in space, The Constellation consists of seven illuminated, inflated stars that hang from a heptagonal steel structure. The Constellation provides a three dimensional performance space in which an aerial act is performed as well as a stunning set for ground based cabaret acts and themed events. Eternal Night is an ethereal, dream like act, performed on aerial hoop to a song of the same name by Emma Shaplin.

The Grinch – Grown-up Christmas Show
The Grinch is a Christmas show rated G for grown-ups, adapted from the Dr Suess children’s book. Empress Stah emerges from a giant gift wrapped box and sets about decorating the stage with all the festive trimmings of Xmas including presents, mistletoe and a tree with lights. A dark moment draws her back into the box, from which she reappears as The Grinch, in a latex mask, and proceeds to steal Xmas back into the box before finally stealing kisses from the audience!!
Music includes snippets of The Grinch by Boris Karloff, The Nightmare before Christmas, It’s beginning to look a lot like Christmas and Kiss by Tom Jones.
No Nudity.
Duration: 6.45 mins.

Hey Santa Clause you C**t – Grown-up Christmas Show
This is very rude !!! A rude, crude, Xmas Cabaret, with an overtone of Scrooge! Empress Stah as the Ice Queen in her Ice Palace makes cocktails from the crushed bodies of mini Santa’s, eats fire, roughs up Santa with an Ice Pick before sodomising him with a lollypop. However a visit from the Xmas spirit gives her a change of heart and in order to gain Santa’s forgiveness, she gives him a lap dance with a happy ending! Music includes snippets from Ice Dance by Danny Elfman, The twelve days of Chrsitmas, Hey Santa Clause you C**T by Kevin Bloody Wilson, Santa Baby plus spoken word.
Explicit Nudity, Adult Concepts and Foul Language
Duration: 15min.

A Gold Star
She’s a Women of Gold, literally gilded from head to toe in Gold Glitter. She understands the magical processes of alchemy and must take care that her ego does not inflate like the gold balloons that surround her on stage. She struts to T-Rex, hula’s to Abba’s ‘The winner Takes it All’, pleasures herself to Gold Finger, inhales laughing gas to ‘Everyone’s a Winner’ by Bonney M and performs the (optional) infamous ‘Bum Balloon’ encore to Spandex Ballet’s ‘You are Gold”.
Contains discreet nudity / explicit nudity with the Bum Balloon Encore
Duration: 10.30 mins.

★ An award winning Trapeze Artist with many years experience

★ Stah devises and choreographs all her own work and has also produced full scale, touring cabaret events 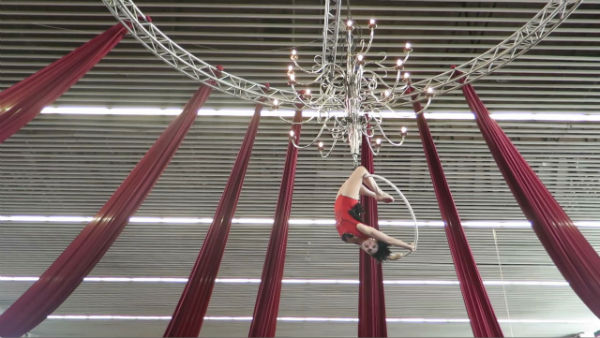 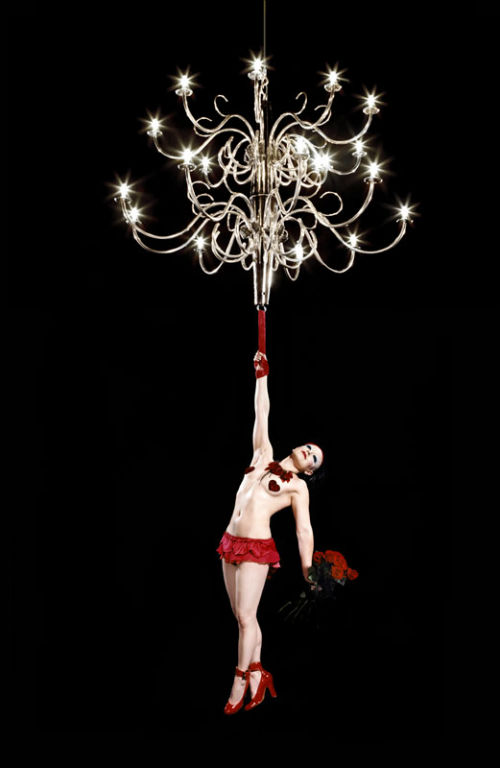 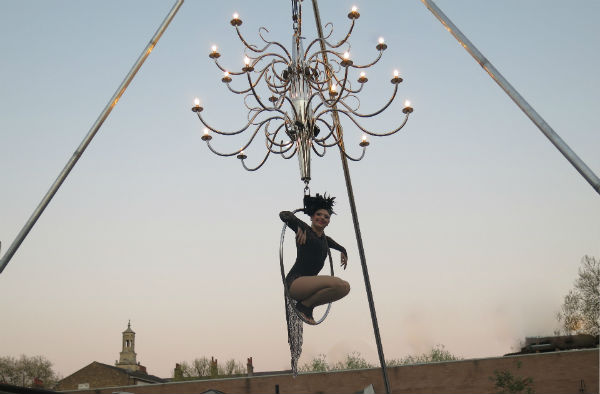 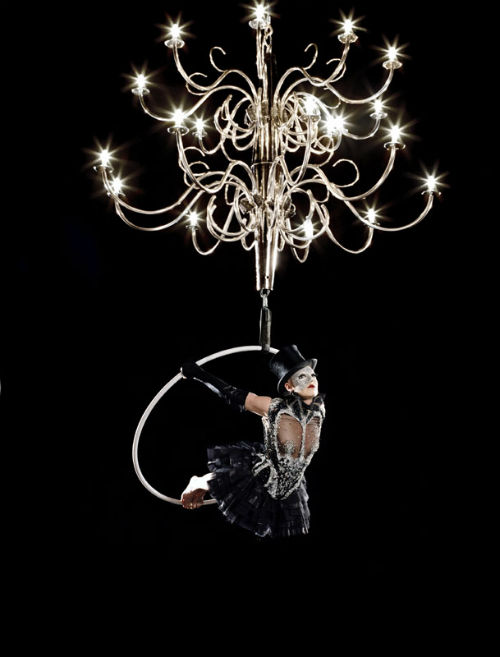 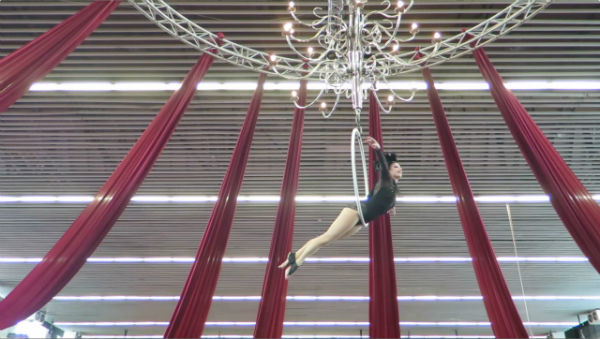 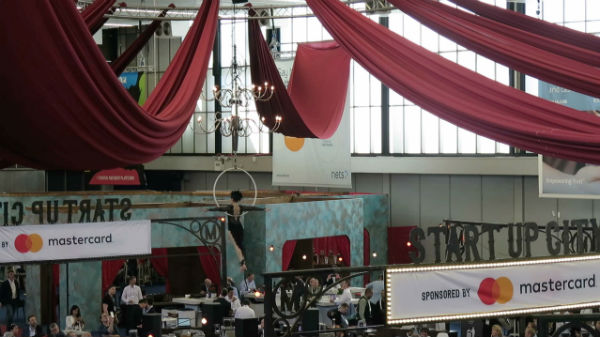 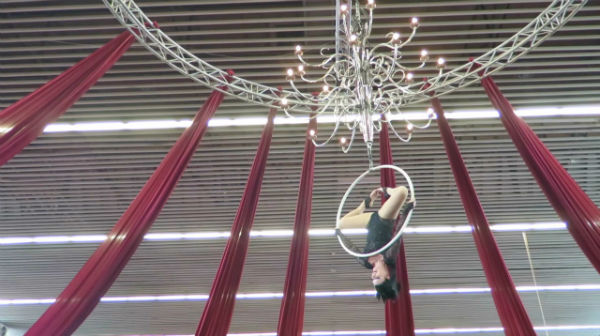 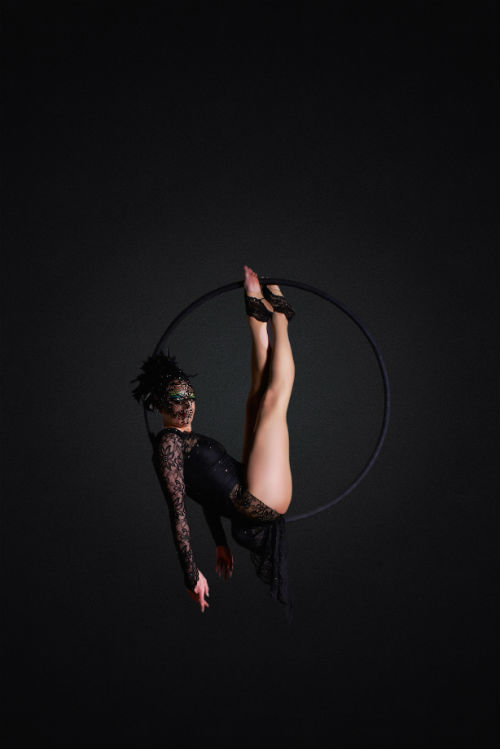 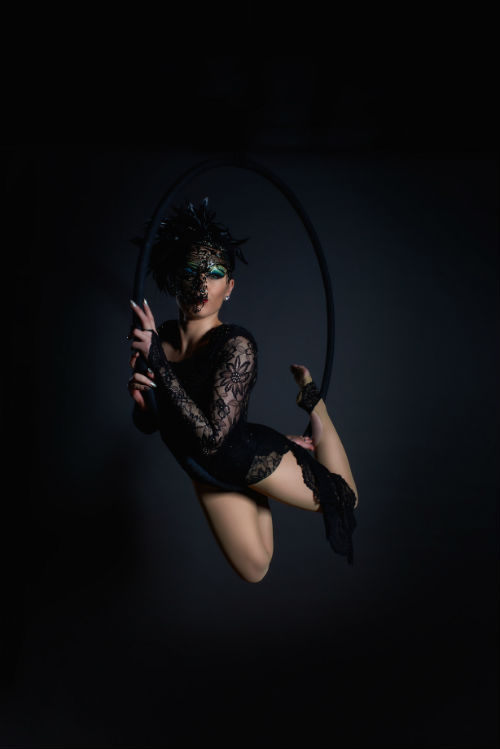 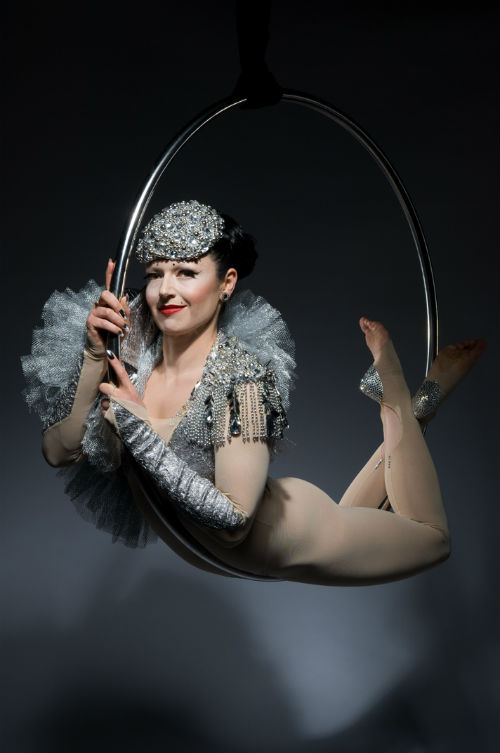 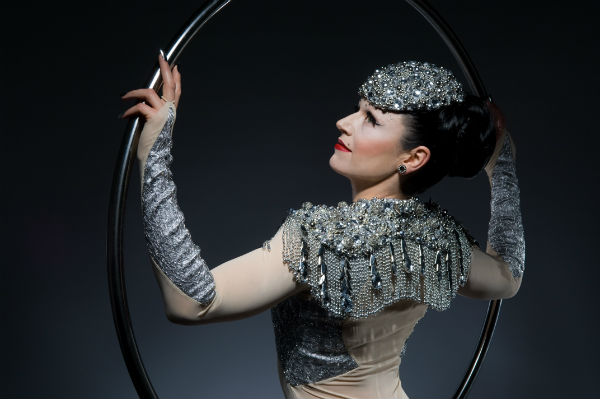 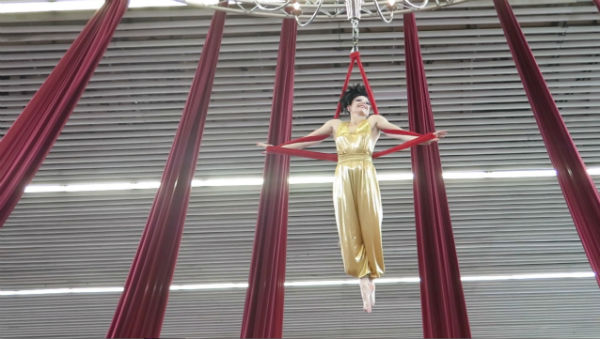 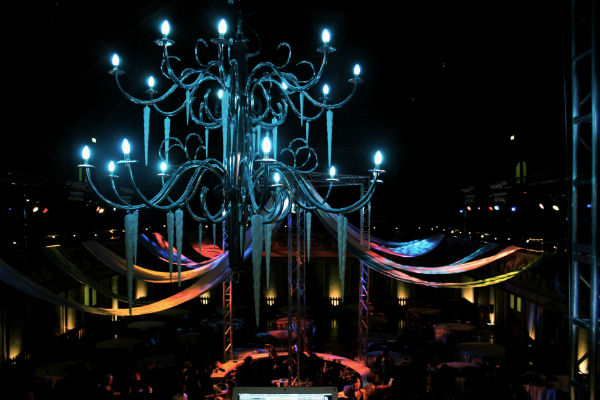 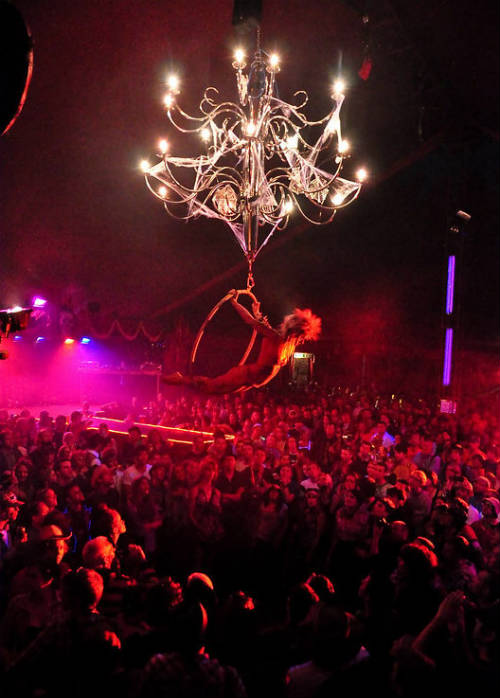 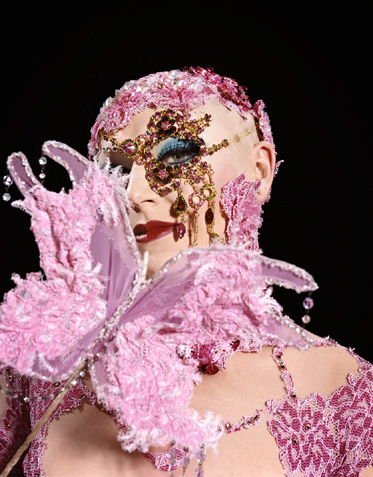 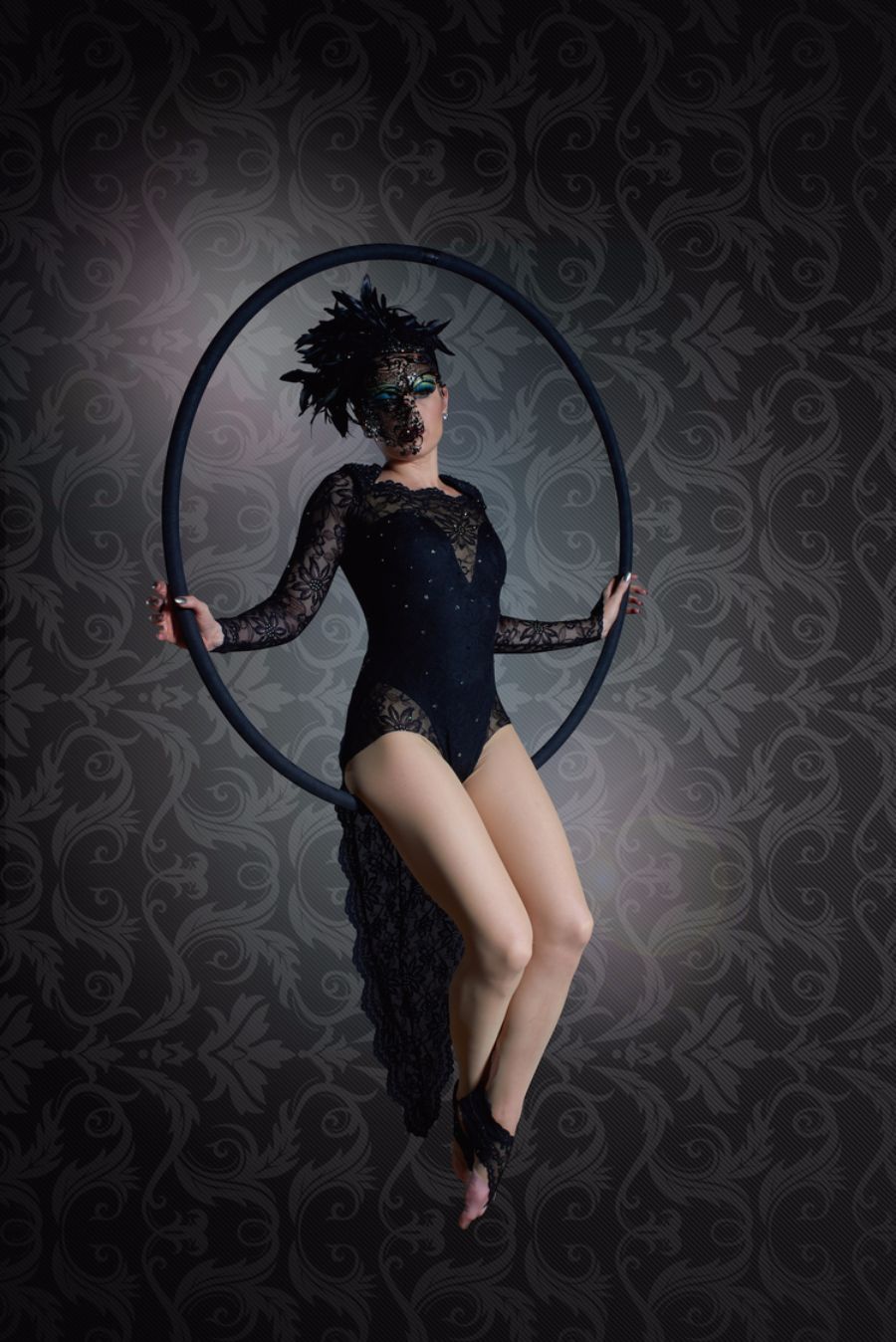 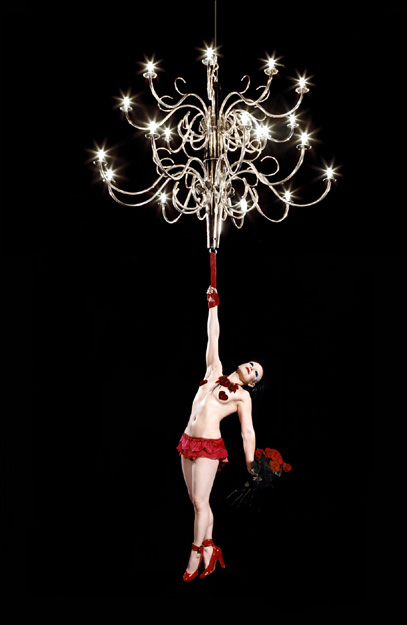 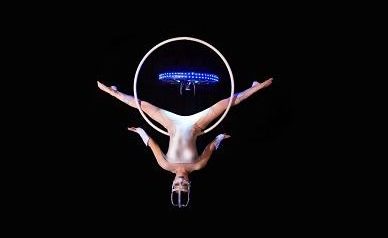 Zero Central performed at our European event and we were really impressed with the flexibility and professionalism of her performance. They were open to music and costume suggestions before the event, and designed their performances to suit with the needs of the audience. The aerial acrobat performance added to the delegate experience and judging by the number of photos and videos taken by the attendees they really enjoyed it!
Hannah Gribbin
Operations Manager, Money20/20 Europe