If you like music, song, dance and comedy, you will love Bowjangles. This multitalented four-piece not only play their instruments superbly; they also sing, they dance, they leap, tumble, juggle and joke, leaving their audience in stitches of laughter – and incredulous. Bowjangles use every style and genre of music you can imagine in energetic and hilarious stage shows which takes string quartet performance to a whole new dimension, and brings old style Music Hall Vaudeville into the 21st century.

Based in London, England, Bowjangles have travelled the world with their unique brand of performance, being invited to entertain the masses from Brisbane to Barbados, Norway to the Outer Hebrides. They perform mainly in halls, theatres and at Arts festivals- however they have also been known to perform on boats and in barns, hospitals, castles, nightclubs, schools, in the middle of roads, in a forest at the dead of night. They now perform in halls and theatres, for private events and festivals.

Bowjangles show ‘On The Box’ – Inspired by the success of the Bowlympics, is a witty and dynamic ‘TV’ stage show, which sees Bowjangles developing further their roles as TV presenters for the BJBC (Bowjangles Broadcasting Corporation).

In a comprehensive TV listing like none you have ever experienced before, the group follow a schedule which includes morning TV, news and weather as well as a soap opera, ‘Strictly’ dance competition, and a late night horror film. The four performers take on all the necessary roles between them, all of course whilst playing their instruments to a jaw droppingly high level, in a clever and unique take on the cultural phenomenon that is TV.

★ Leave their audience in stitches 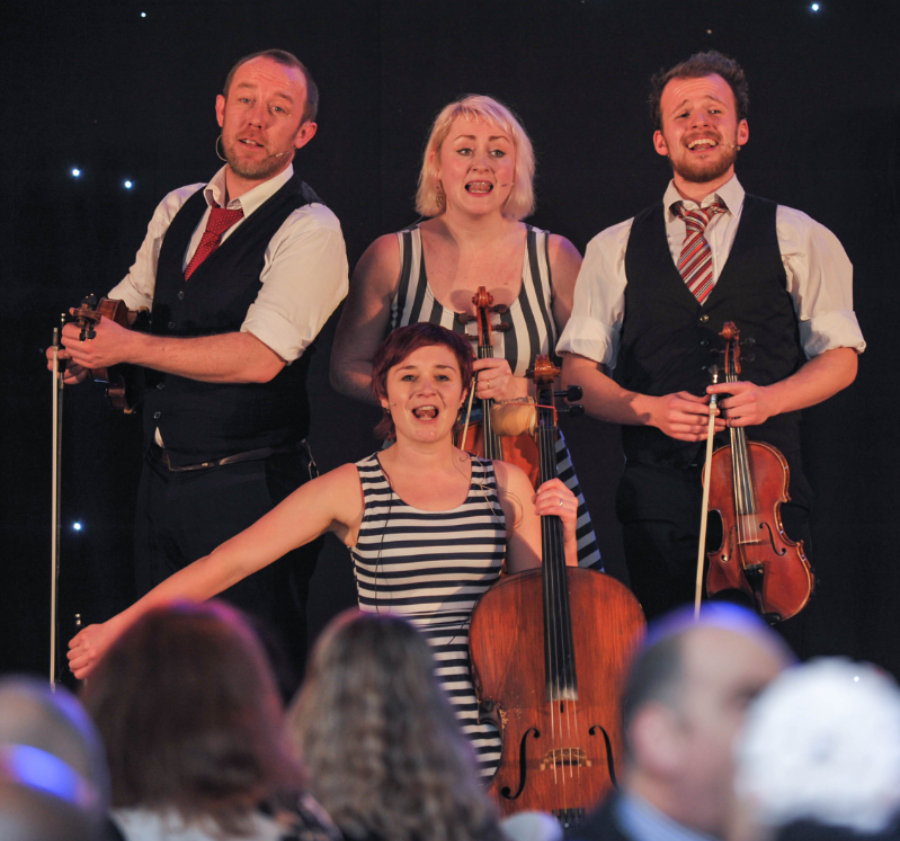 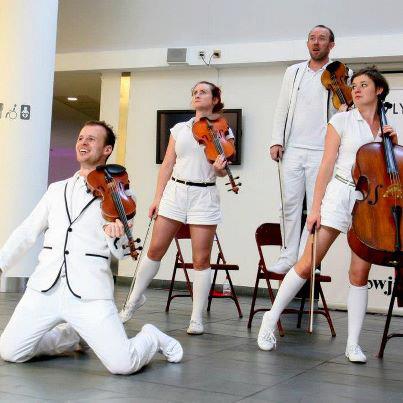 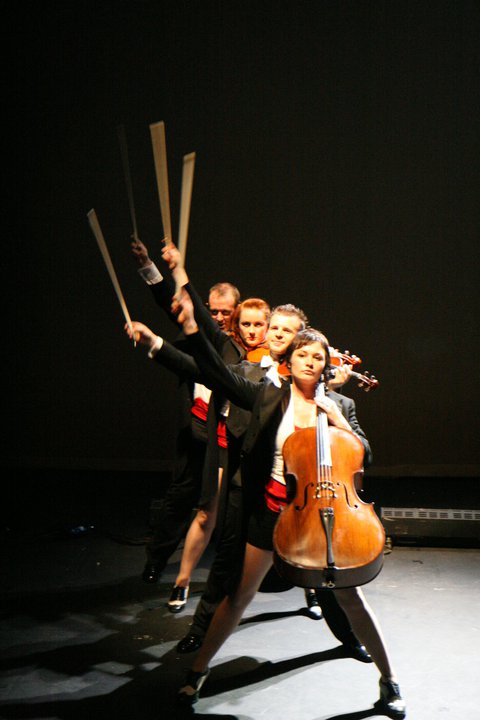 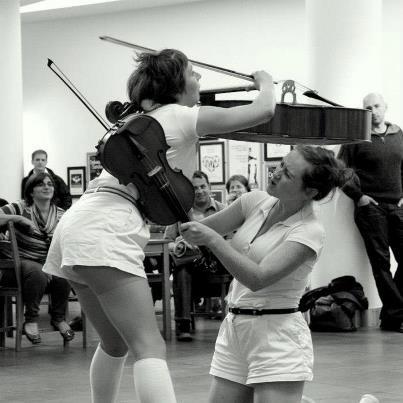 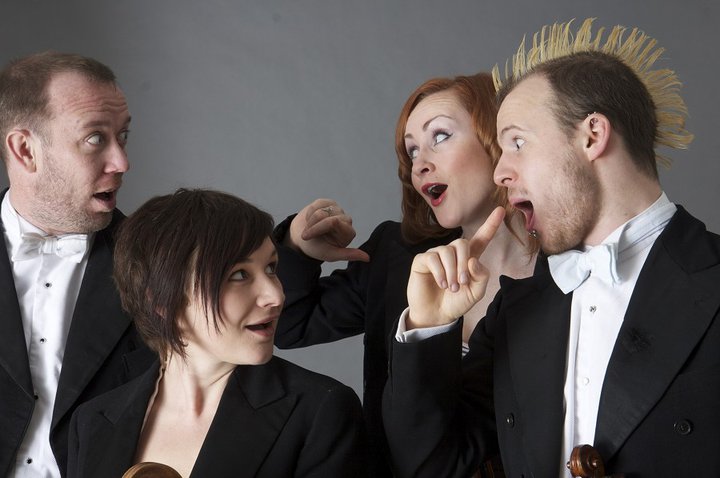 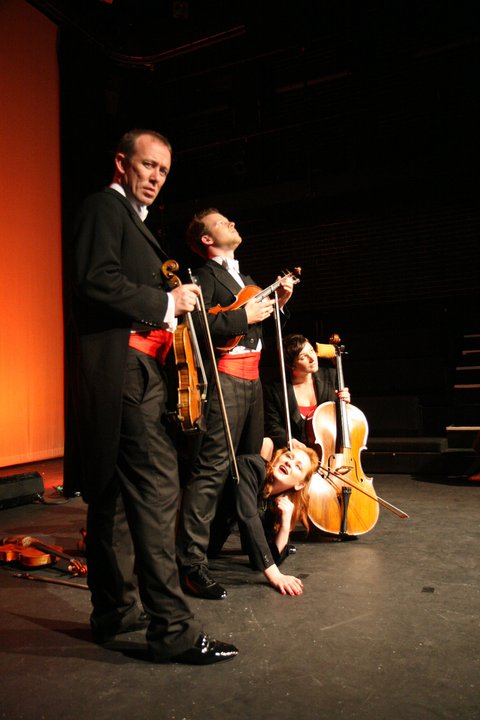 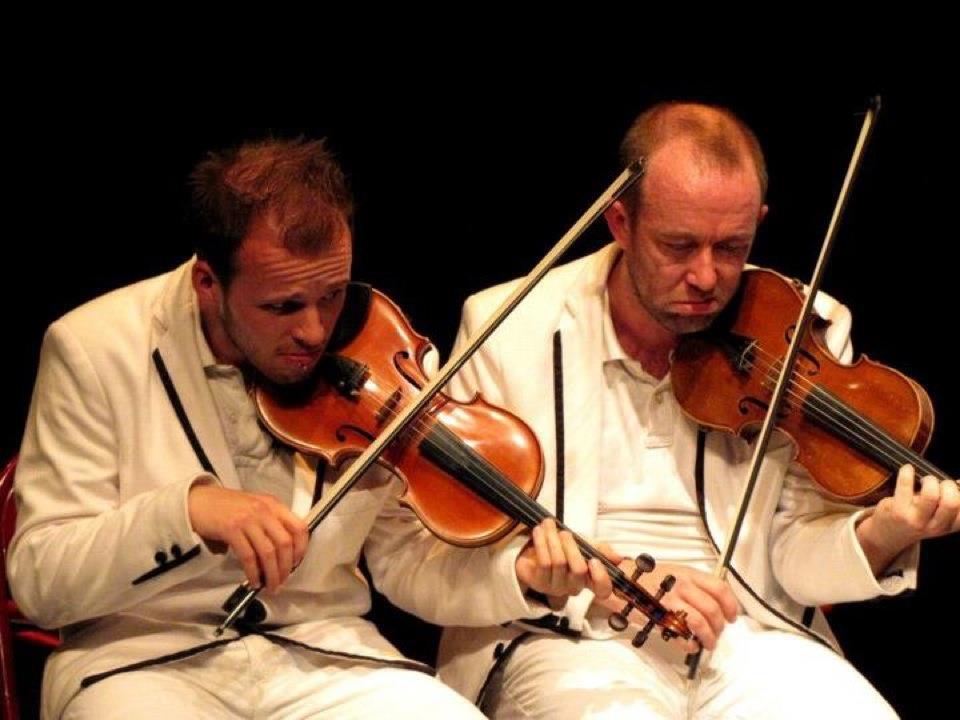 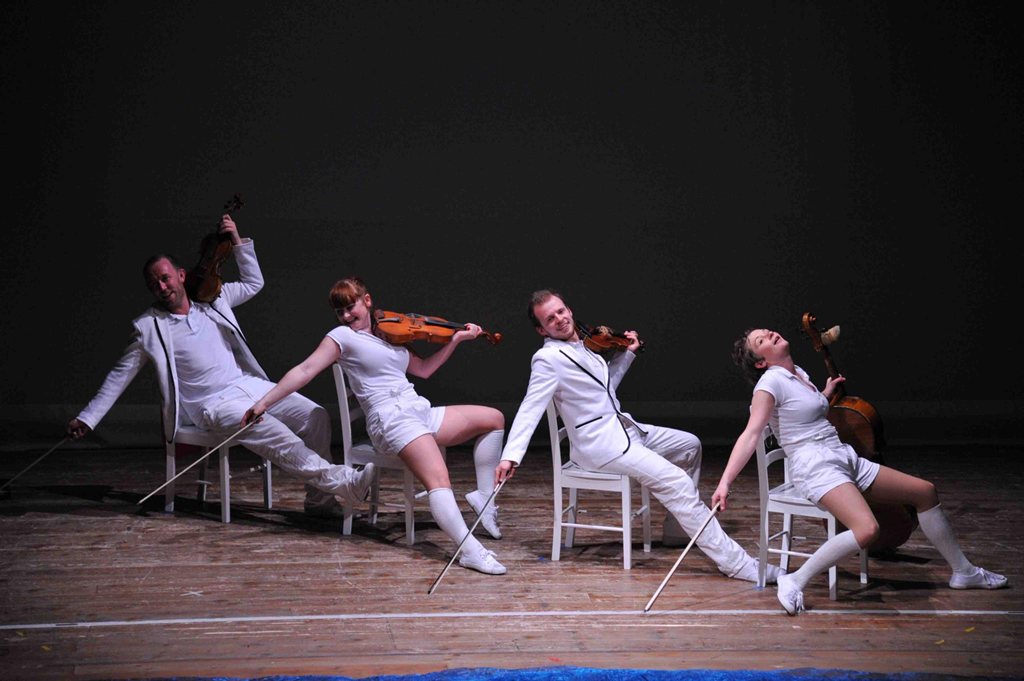 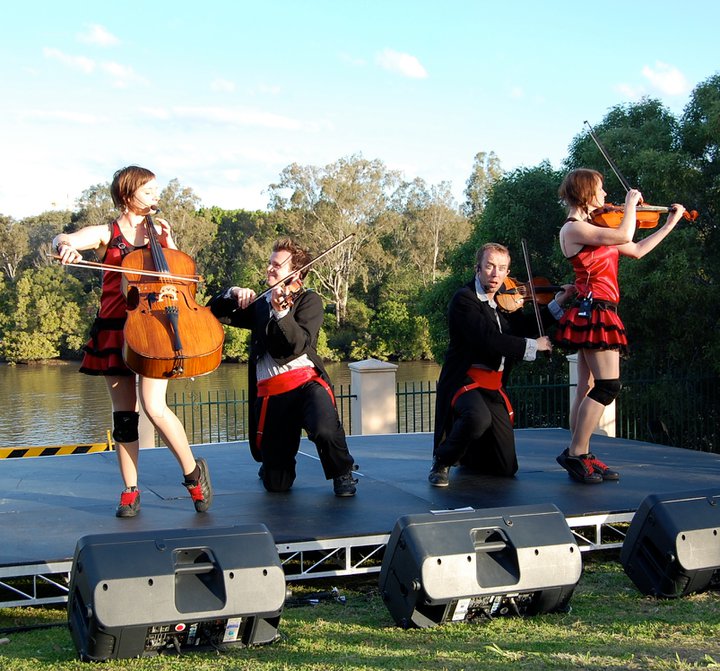 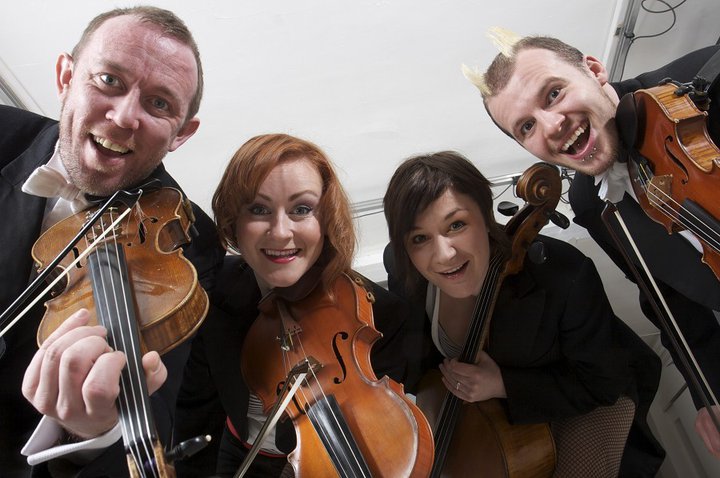 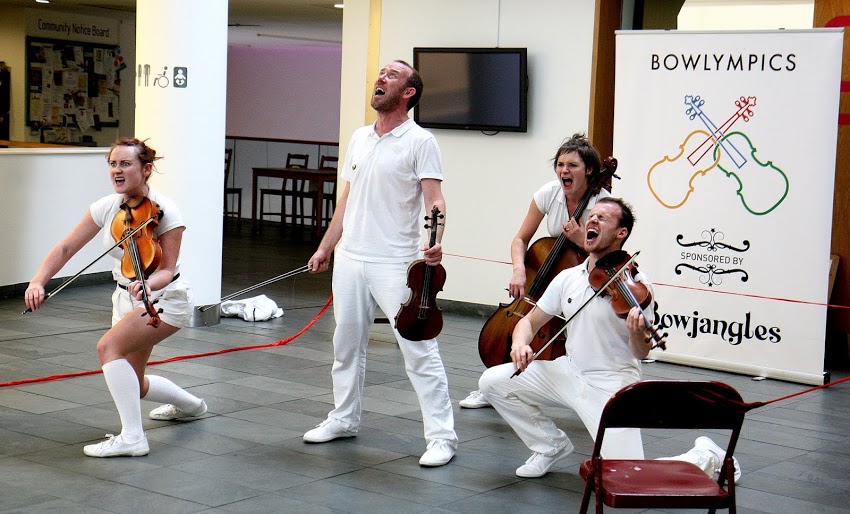 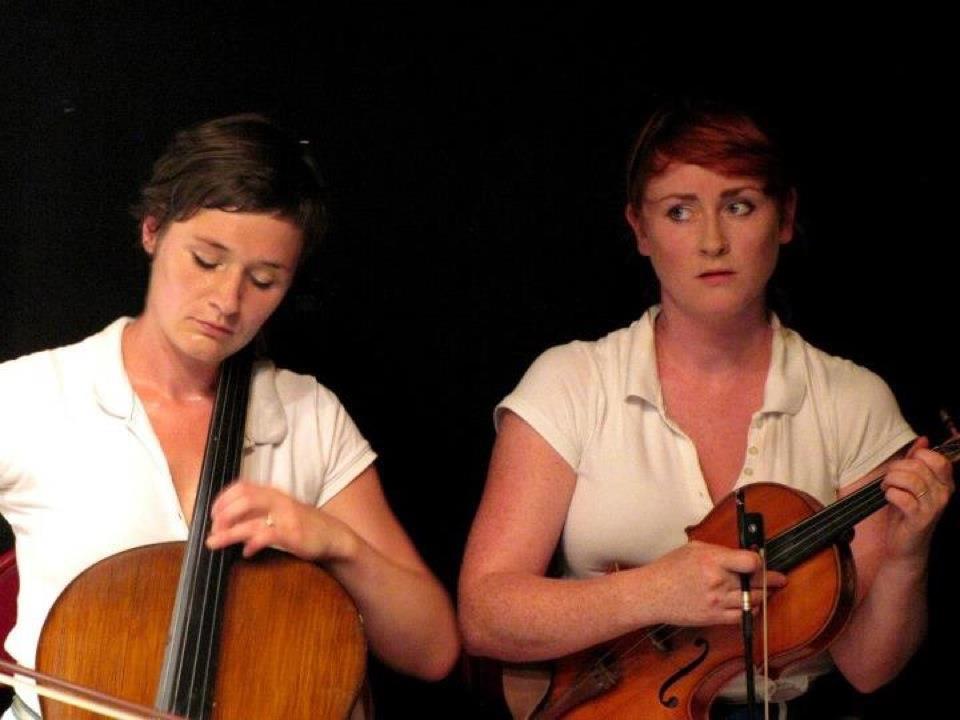 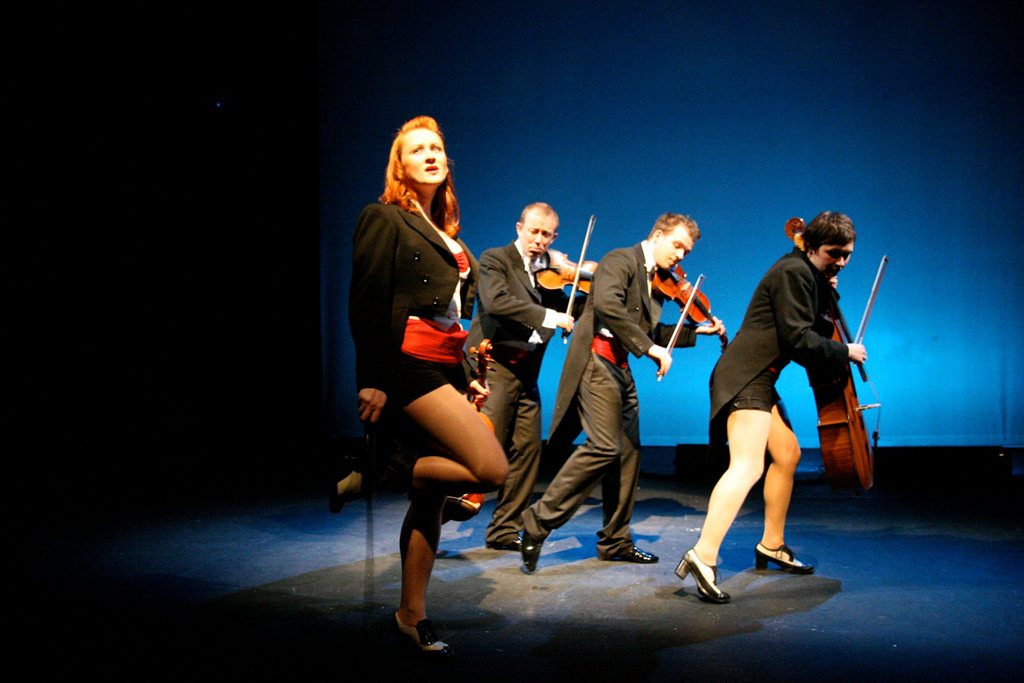 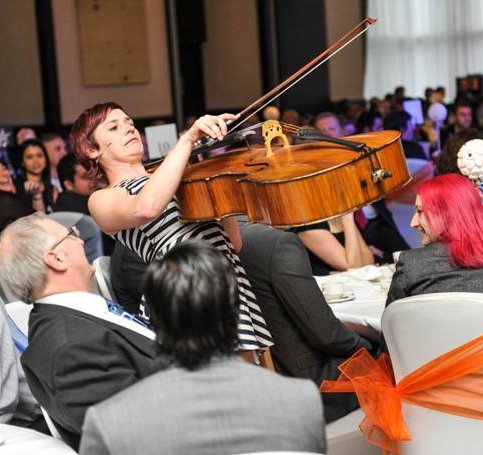 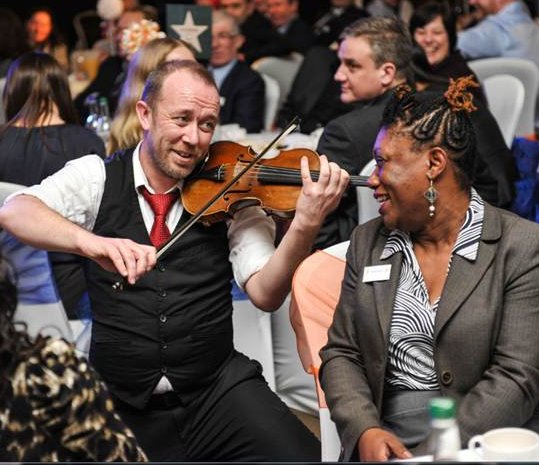 “Fun and glamorous, you made the festival”

“With their energy and diversity, Bo-Jangles epitomise everything that is great about Glastonbury”

“…The Bo-Jangles went down very well…They provided the correct level of action, energy and entertainment for what could otherwise be quite a dry event…The band were really friendly and accommodating to the fact that the stage was not as large as I would have liked it to have been…Thanks a lot for all of your help with the above as they really were great…”

4x clip on or similar radio mikes with packs and receivers for instruments, 4x headset radio mikes for voices, or 2 handheld mikes on boom stands, or a combination. Radio mics are required for audiences of over 100 people. Acoustic performances are suitable for events with up to 100 people. Performance space required is 4m x 4m minimum, with a ceiling height of 2.7m minimum.