Andrew believes in providing quality event entertainment and character based performances designed to capture the imagination of both young and old alike. With a vast array of characters each with their own story to tell, the performers will amaze and amuse, whether circulating on stilts, wandering on wheels or frolicking on foot!

Electric horses and other steeds that come complete with characterful riders, music and sound effects to add to the fun are also available. The electric equines are guaranteed to turn heads wherever they go, creating smiles in their wake. Stilt characters in original costumes lift the eyes and mood of any audience and our 14 foot gliding ship, along with crew, is fabulously fantastical. Andrew works at all types of events from full scale festivals, regattas, shopping centers, stately homes, schools and museums. He has even conveyed a bride and groom to their wedding reception in our Stately Galleon.

★ Captures the imagination of the young and old

★ Vast array of characters each with their own story 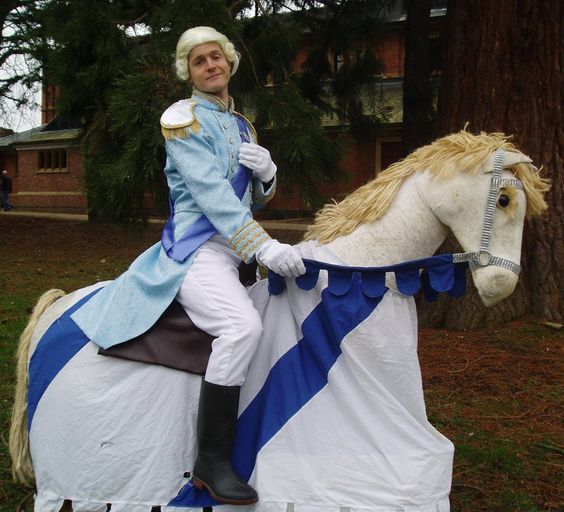 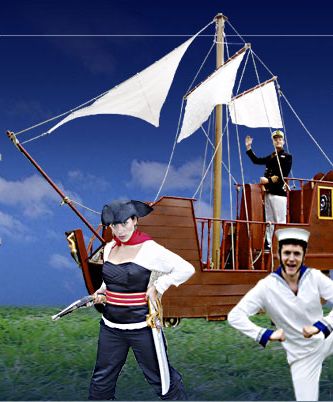 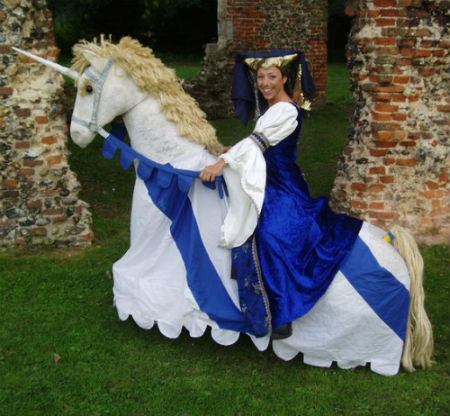 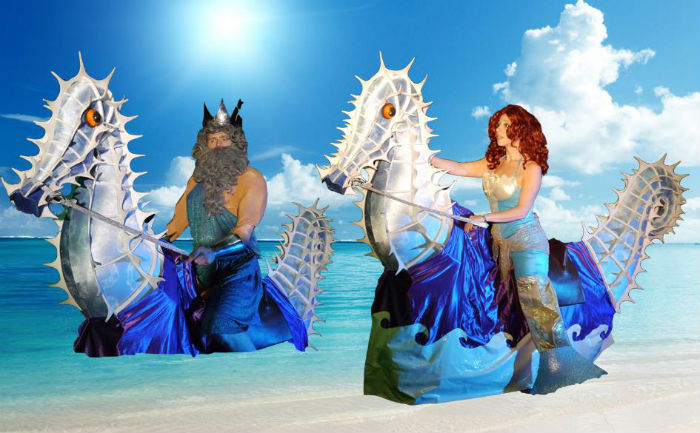 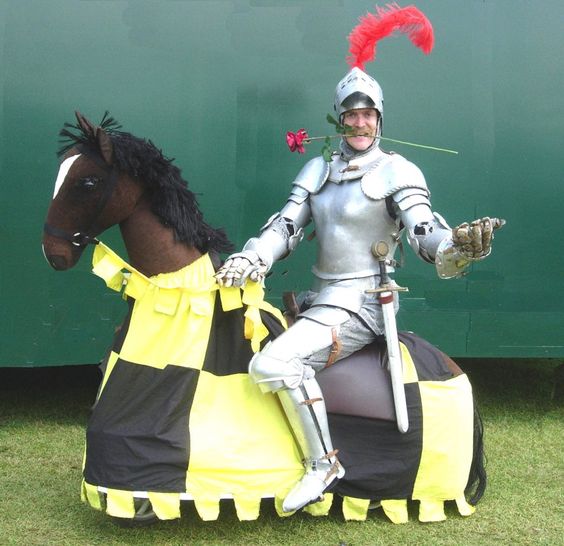 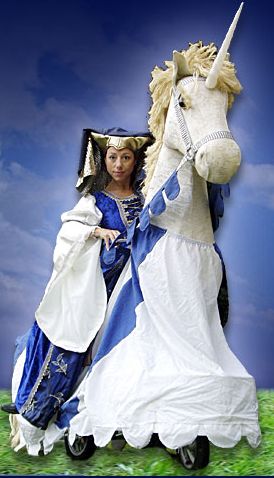 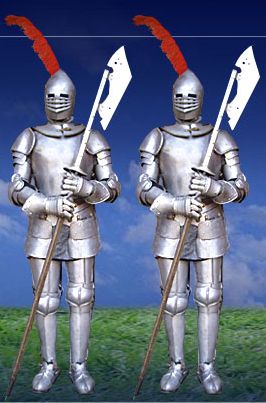 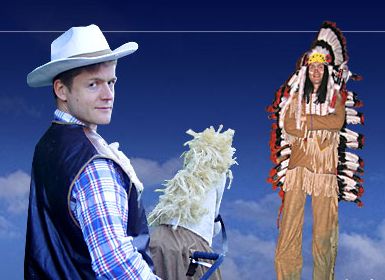 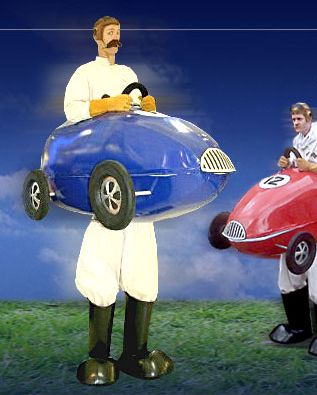 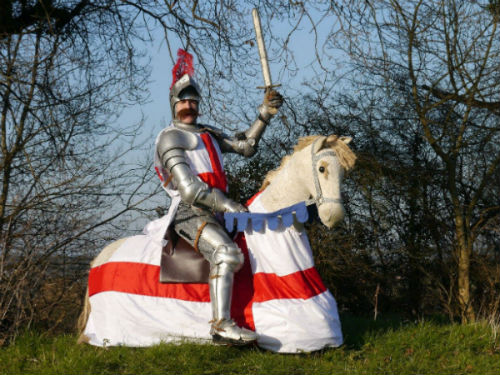 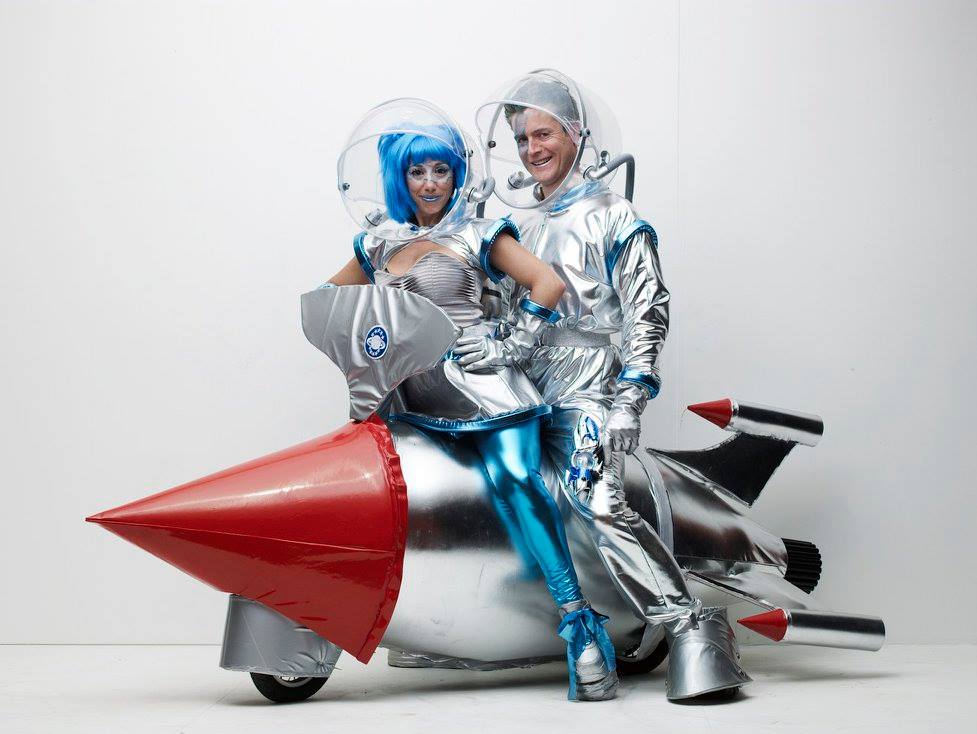 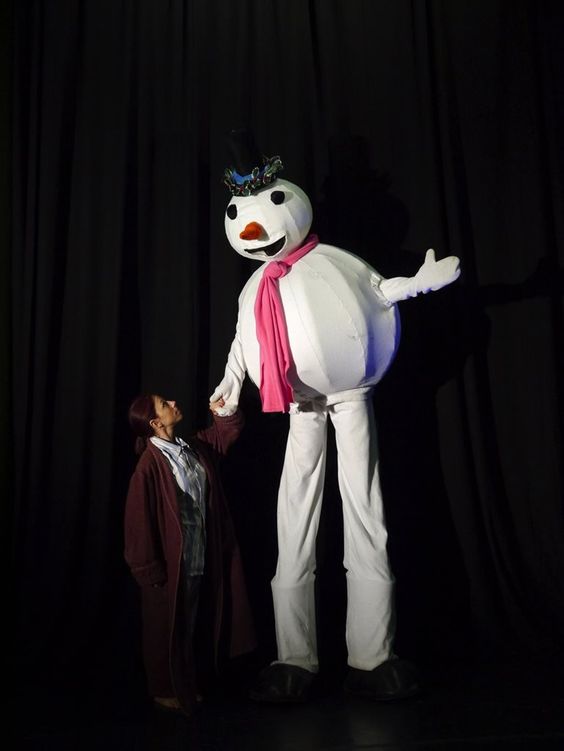 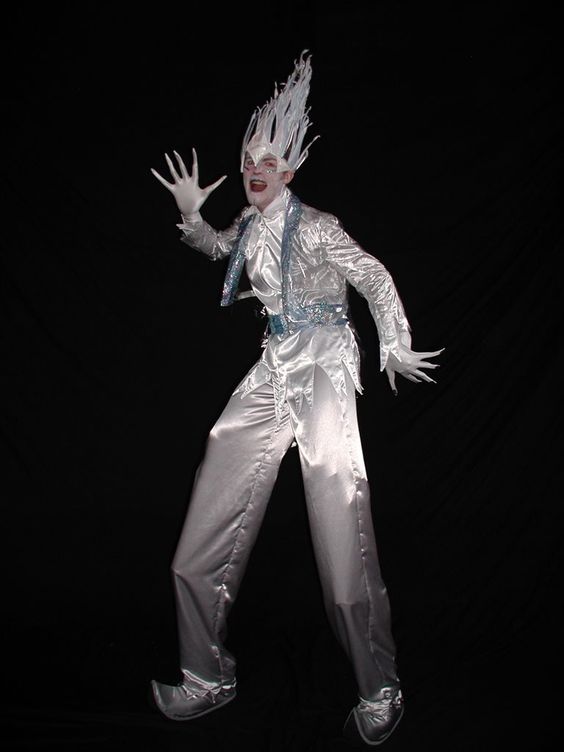 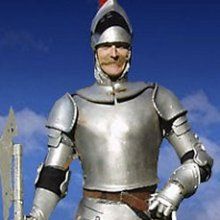 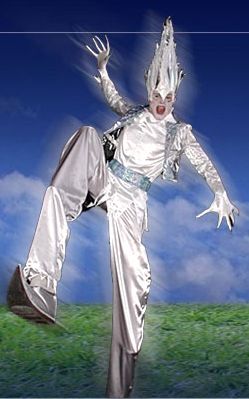 The acts were brilliant and did exactly what we hoped. They went out on time and interacted with the audience really well. No suggestions for improvements, just keep doing what they are doing!”

“Really good event thank you, as usual your performers were great….Electric Reindeer: Was great, really nice chap and the act went down very well. Stilt Snowman: Probably the most popular of the human acts, very friendly and easy to work with and attracted a crowd of their own…”

“Can you let the guys know that I much appreciated their flexibility and understanding, they were really great. Thanks again.”

TOOT TOOT! These fine racers are a cut above the rest. Bringing with them an era of good sportsmanship, when classis engineering was unmatched. From the off they will put in a stirling performance. No moss on these wheels! Its all in the taking part, old boy.

The cars are also available with other drivers, so if you want Penelope Pitstop or anyone else, just ask!

Yee Haa! These wil west heros are at home on the range, or anywhere else. Theyll keep their wheels a rollin and rustle up an amused crowd. Available as cowboys (and girls), or as Native Americans. They bring along some mighty fine music and often find themselves “wanted” in every county!

Leader of the Big Foot tribe, he stands head and shoulders above the rest of his noble tribe. An inspiration to all, he has carved many of his deeds in a totem pole too tall to mention.

Still seeking his Cinderella, this fins prince has stode many a league searching for his bride. Available on his horse, stilts or on foot, he is the man of every girls dreams!
He is sometimes found with his footman carrying the cusion and glass slipper, everyone will be considered, but he has yet to find the perfect fit! Alternatively Cinderella can be provided to accompany him, to create the perfect fairytale couple.

Maiden on a Unicorn:

As legend dictates, only a maiden can ride the mythical unicorn. Such a graceful creature, moving as if gliding (the unicorns cute too). Legend can be defied as the unicorn is also available with other riders, wizards, elves, a prince and many more besides.

Found in all stately venues and amazingly effective for Halloween anywhere.
These seem like inanimate decorative suits of armour until they move. They add an element of scary surprise to an event, that can be tempered with some comedy if desired.

Ready for another chukka? Ralf Le Wren Fortherington-Smythe brings a new class of polo playing to a field near you! With his new miniture pony, he puts the low into polo.

A fantastical square rigger from a bygone age brings the high seas to your event.
Whatever the occasion, this ship majestically sails the land, equipped with a sound system and effects, it has led parades, told stories and transported VIPs to creating a dramatic arrival with a difference! The ship can be crewed by motley pirates, saucy sailors, cavalier captains, fantasy footmen or more. As well as our performances, the ship is an eye catching (electrically powered) moving stage, for indoors and out, and is available for street shows, walkabout (sailabout!) and can be also used as a nautical platform for all types of performance from storytellers to musicians.

Introducing Sir Miles Longshanks, a knight of the highest order and elevated stature.
He takes chivalry to new heights and is always there to see off lesser knaves and varlets.

The clash of arms and shouts of noble insults often precedes the arrival of the chivalrous Knights of Wuthering. By sword, shield, lance or mace they will defend the honour of any passing maiden. Their noble steeds are ready to do battle, whether jousting or questing for fierce monsters. If a gauntlet needs throwing down, these are the men to do it. Whinnying, galloping and an assortment of other sound effects and music add to the impact.

First out of the gate, its Snowballs Chance! This thoroughbred is often found warming up on the paddock, turning heads wherever it goes, yet cannot be found on the race card. His jockey is on hand to give tips that are guaranteed to not get you rich quick, although the music and sounds emanating from his electric steed are hard to ignore.

No galaxy too far, no sci-fi cliche too much! Our intrepid interstellar adventurers have reached earth on their own personal rockets from the future. They bring that classic era of science fiction to your event and are curious about how humans manage to cope before warp drive. The rockets are equipped with lights, sound effects and bubble exhausts as well as a selection of familiar theme tunes.

Astride the royal seahorses, these denizens of the depths have left the deep blue sea and are out to meet the landlubbers. Choose your sea themed character to be out and about on (hopefully) dry land. As well as Neptune (Poseiden) and mer-people you can have sailors, pirates, princes and princesses. However the ocean is never far as the seahorses watery sounds float over the crowd. Beautiful and striking, these mounts never fail to add to water themed, or any other, event.

Some cheeky elves have taken Santas reindeer for a ride. Well, after all, Dasher needs to be in shape by Christmas Eve! They are out to check on this years presents and whether youre on the naughty list. Classic Xmas tunes and sleigh bell sounds drift around them as they go on their festive way. Its also been rumored that Jack Frost and Santa have been spotted riding them too!

As legend dictates, only a maiden can ride the mythical unicorn. Such a graceful creature, moving as if gliding (and the unicorns cute too). We can defy the myth as the unicorn is also available with other riders (wizard and prince).

Still seeking his Cinderella, this fine prince has strode many a league searching for his bride. He is sometimes found with his footman carrying the cushion and glass slipper, everyone will be considered but he has yet to find the perfect fit. Alternatively Cinderella can be provided to accompany him, to create the perfect fairy tale couple.

Ready to mingle Amethyst and her partner Nightshade Nick will always make you smile as they love meeting new people. If there’s an event, they are there to add glamour and pizzazz to any party! The couple turn heads as they swan through the crowds but remember Amethyst can also venture out alone and hang out with the cool folk.

Ready and willing to meet his guests Lord Rufus Dawley of Upton Abbey is always the perfect gentleman. Looking ever the dapper man he is the Lord of the Manor and takes pride in his appearance and is always on hand to compliment the ladies. Alternatively Lady Nora Dawley can be provided to accompany him, to create the ever distinguished couple.

The King of winter is here! This chilly sprite is out and about making those cheeks rosy and fingers blue. Adding glittery trails to grass and glass everywhere, but watch out for his bite! He can be played merely mischievous or slightly sinister depending on the event.

Snowmen come in many sizes, and Frosty is no exception. Available at stilt height or thawed down to ground level, these winter characters never seem to melt, despite the warm reception they receive.

Also bringing Yuletide cheer, they have a Christmas tree. Traditionally decorated, illuminated and instantly recognizable, they are always seeking presents to stand over.

The usual length of the performances is 3 x 45 minutes.

Snowmen come in many sizes, and Frosty is no exception. Available at stilt height or thawed down to ground level, these winter characters never seem to melt, despite the warm reception they receive.

Also bringing Yuletide cheer, they have a Christmas tree. Traditionally decorated, illuminated and instantly recognizable, they are always seeking presents to stand over.