Formed in 2013, Las Adelitas are the only all-female Mariachi band in Europe! Based in London these female Mariachi band hailing from Mexico, Cuba, Colombia, and the UK, shatter stereotypes bringing authentic, high-quality mariachi with a feminine touch.

Las Adelitas name is based on the women who fought alongside the men during the Mexican revolution and represent female strength and strive to be advocates for confidence and empowerment amongst women. With many years of professional experience both with their instruments and in the mariachi style, vocal harmonies, and the vocal power expected in any serious mariachi band, they really look the part!

They also serenaded Salma Hayek for her birthday, performed for pop star Sophie Ellis-Bextor and have played at the British Museum, the Victoria and Albert Museum and the Camden Roundhouse. With no less than 3 lead vocalists, 2 trumpets, 2 violins, guitar, vihuela (small Mexican rhythm guitar), and Guitarron (large Mexican bass) they make a powerful entrance guaranteed to liven up any kind of event.

Las Adelitas have four different striking costumes tailor-made and brought back with love from Mexico. This female mariachi band have a huge traditional repertoire which ranges from romantic, lively and upbeat music to traditional songs, as well as several English-ladeanguage songs arranged especially in true mariachi style. They are just as comfortable on a stage with a full PA to playing completely acoustically.

★ Featured band at The Mariachi Women’s festival in L.A. 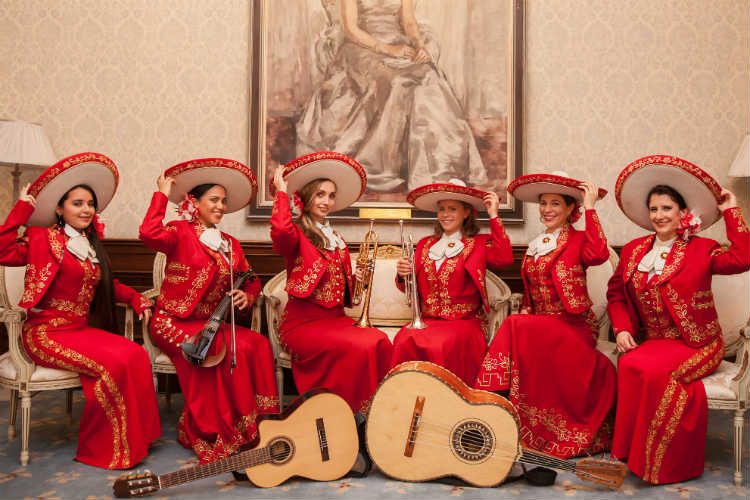 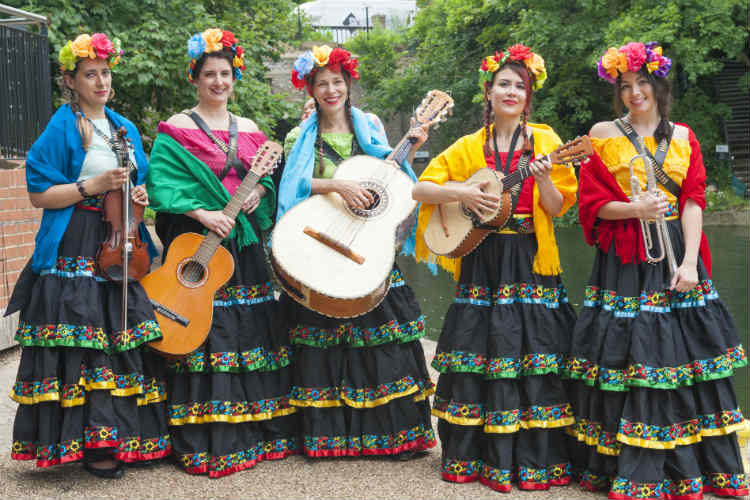 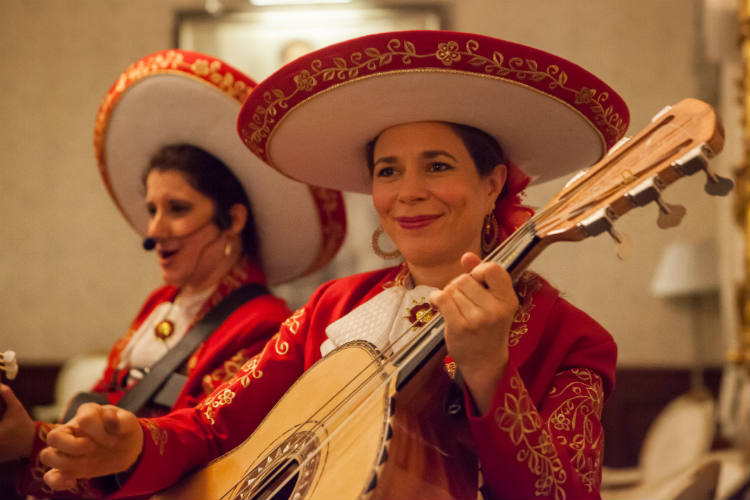 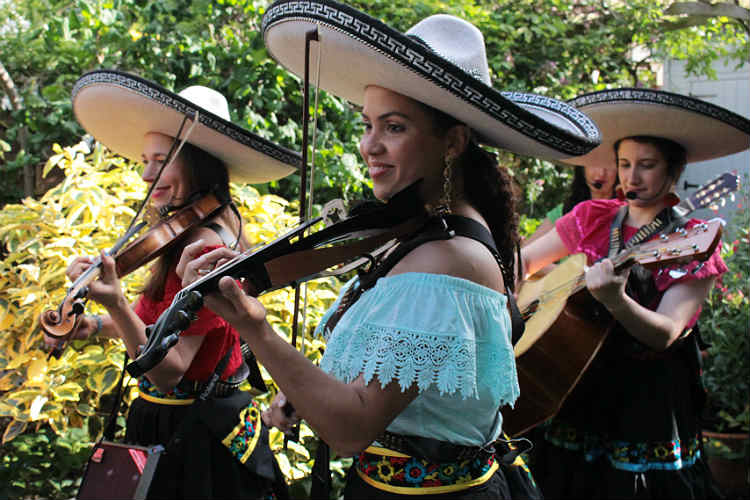 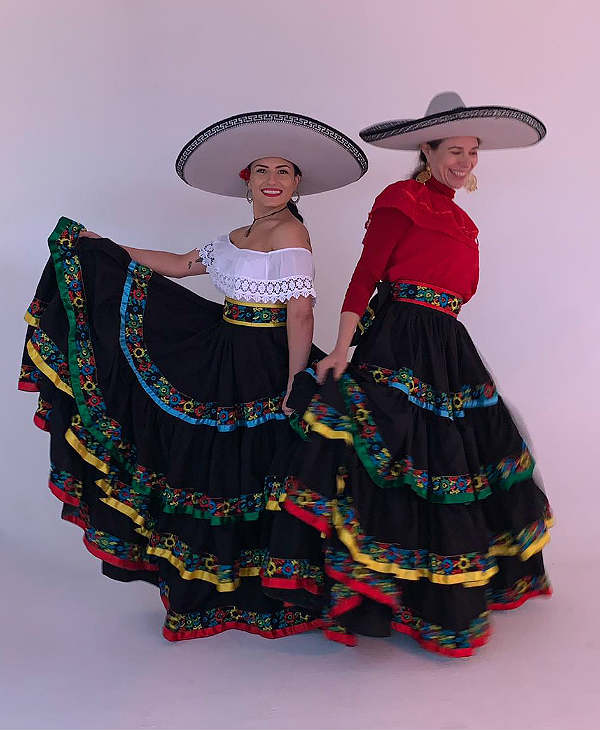 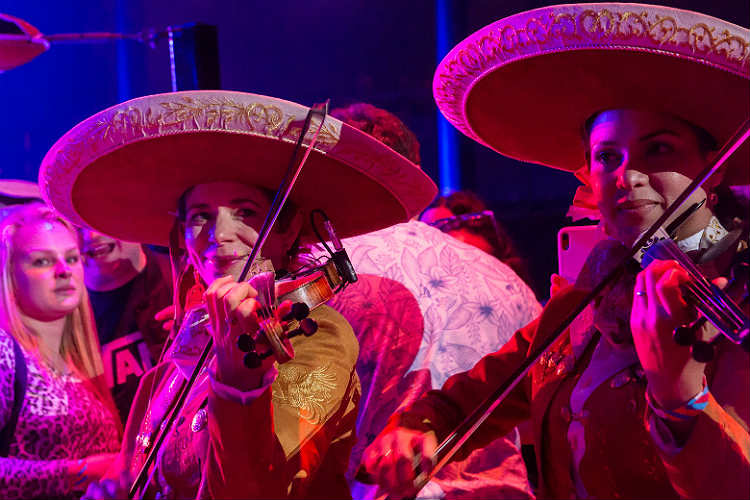 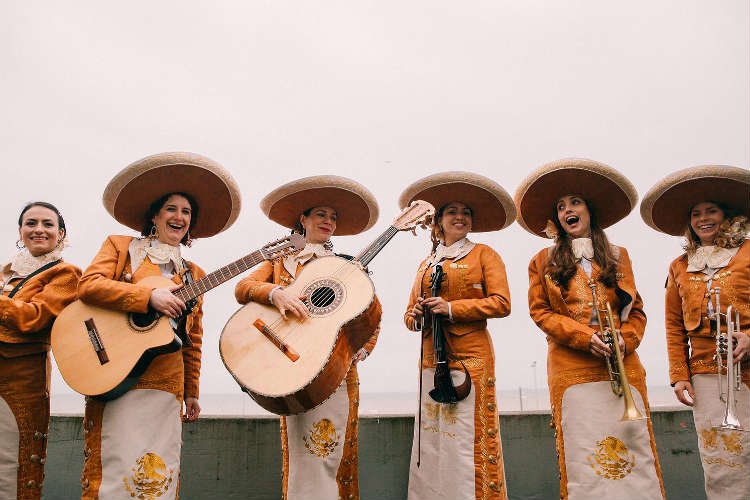 “Las Adelitas played at my wife and I’s wedding in Liverpool this summer, and they were incredible! My family comes from Mexico and many of them were flying into the UK for our wedding, so it was important for me to include some of my culture at our wedding reception with an authentic mariachi, and Las Adelitas were just that. When my wife and I walked into our wedding reception we entered in to one of my favorite tunes and I will never forget it. A massive thank you to all the ladies for making the trek up to Liverpool and making our day so special. We will always remember it.”
– Vincent Battaglia

“Just wanted to say a BIG thank you to all Las Adelitas for last night. The show was totally brilliant, and you were all fantastic. We’ve only heard great comments from the people who came. Thank you so much and we hope you enjoyed it as much as we did!”
– CASA Festival Team

“Such an amazing surprise! My wife and I hosted an afternoon tea after the day after our wedding and I had family from Mexico in town for it. Everyone was blown away and we would absolutely recommend Las Adelitas in a heartbeat!”
– Carlos and Rachel

“We went to see Las Adelitas in Hastings after watching one Youtube video and they blew me away! We followed them to three venues as the experience was too good to miss out on. The costumes, the charming introductions and the zest for life in their performances were all first class as were there choice of songs. I can’t recommend them enough as they are the most refreshing and enjoyable band I have seen in some time. Can’t wait to see them again.”
– Steve, Brighton.

“Yesterday I had the pleasure of listening to Las Adelitas for the first time – what an amazing performance. Very best of wishes to you.”
– Georgios Argyropoulos (BNPA reception event in British Library)

“Today I had the opportunity of listening to Las Adelitas at a Mexican event in London; it was such a complete pleasure to witness such wonderful talent! Their traditional clothing and whole image is absolutely beautiful. I would like to thank each one of the group members for bringing our Mexican culture to the UK, you make us Mexicans very proud!”
– Ana Rodriguez (Mexican pre-Christmas celebration)

“We would definitely recommend them! They worked around our party needs and ensured everything was taken care of. The music these ladies played was exquisite and authentic! They created an excellent party environment for our small theme party.”
– Brian W. Percy (U.S Embassy- London)

“The band were wonderful on Sunday. They spread utter delight for an hour. And Harry, our middle son, was purring. Thank you.”
– Tim Franks, Presenter, Newshour, BBC World Service (Barmitzvah)

“The ladies were fantastic, they arrived and were very flexible with our changing plans and the costumes were amazing. The music was great, and they acted very professionally throughout the evening. Very unique to have an all-female band and it works really well. I wouldn’t hesitate to hire them again.”
– Daniel Evans (IKEA)

English
Matilda (she take my money)
In my Life (Beatles)
Mambo Italiano
Mambo n.5
All of me
My Way
Valerie
Back to Black
Don’t Worry be happy
Despacito
Perhaps Perhaps
Rollin in the deep