Air Gravity Gymnastic Show consists of current members of the Great Britain Trampoline Gymnastics Team and a former Olympian. Between them, they have won a vast amount of medals in their sport both at national and International level and are available to hire for corporate events.

They were catapulted into the public awareness after their first appearance on the prime time ITV1 show, Let’s Get Gold in July 2012 where in the final show they were announced as runners up. Air Gravity Gymnastic Show all have a high level of professionalism and work ethic, much needed in this demanding extreme sport.

Air Gravity was formed in 2012 after being head hunted by ITV researchers to appear in Let’s Get Gold to showcase their sport with a ‘twist’ to the British public. The troupe has trained together for many years at the Northamptonshire Trampoline Gymnastics Academy one of the strongest clubs in the country and they would now really like to become an entertainment brand.

Air Gravity is directed and coached by the husband & wife team Harvey Smith & Tracy Whittaker‐Smith. Tracy is also a Senior Coach with the Great Britain National Team and Coach at the 2012 London Olympics. Tracy is the Performance Director at the hugely successful Northamptonshire Trampoline Gymnastics Academy and Harvey is the Head Coach.

The Air Gravity troupe received many positive and favourable comments and reviews both during and after their Let’s Get Gold experience.

Standard Length of Performance:
The gymnastic shows can vary from between 3 and 6 minutes for a fully choreographed act to music, lasting up to 20 minutes for an interactive freestyle act. A combination of both choreographed and freestyle elements is available. They can perform multiple shows in one day depending on the requirements of your show, promotion or event. 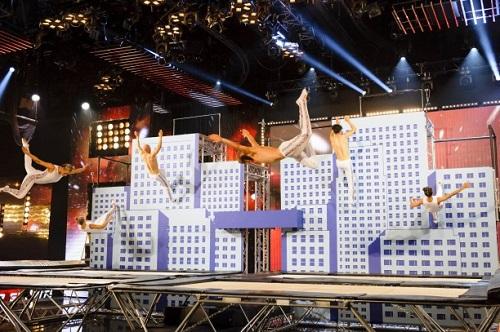 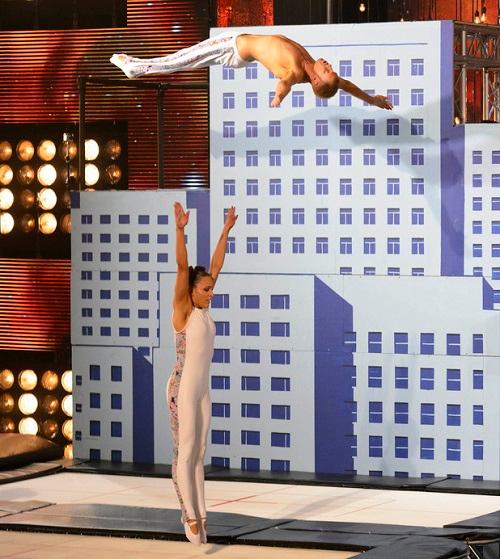 Amazing, I was blown away.
Una Healey

Serious Stamina, look at the physiques on you.
Freddie Flintoff

Check out other Sports Shows