21st Century Riot is a 4 piece Indie Tribute Band that specifies in something a little different to your normal bog-standard function act. Playing indie and rock hits as a super-tight 4 piece all male line-up, this band is aimed towards young wedding audiences, University Balls and corporate events who want something just that little bit different.

When four of London’s leading session men decide to put a band together to pay tribute to their favourite rock artists you know it’s going to sound good! From The Killers to T-Rex via The Kaisers, Franz Ferdinand, Blur and The Undertones, 21st Century Riot play the best of the recent crop of guitar bands and some of the great artists that have influenced them.

The last few years have been some of the best ever for new guitar indie bands, spearheaded by the UK’s Kaiser Chiefs and The Killers from Vegas. Hot new tribute act 21st Century Riot bring you the biggest tracks from these bands and add into the mix songs from their indie peers and influences, including Franz Ferdinand, Arctic Monkeys, The Who and Iggy Pop.

1st Century Riot has played with or alongside some fantastic bands and artistes! They have supported the amazing Shakin Stevens at the O2 Indigo, and the musicians have collectively managed to put together a pretty mind-blowing CV, having played for Robbie Williams, Jools Holland, Amy Winehouse to name only a few, and have toured the world playing to audiences of up to 100,000 at venues and festivals such as Wembley Stadium, Reading Festival, Glastonbury Festival, Leeds Festival, T in the park, Vfestival, Pink Pop (Amsterdam), Munich Stadium, Olimpiski Stadium (Moscow), Ajax Stadium (Amsterdam).

As a Indie tribute band ‘Riot’ have been playing all over the UK for the past few years, at hundreds of sweaty student unions around the country, as well as for corporate clients like HSBC, Toyota, Yamaha, and eXtreme (sports channel).

★ kicks your guests into action 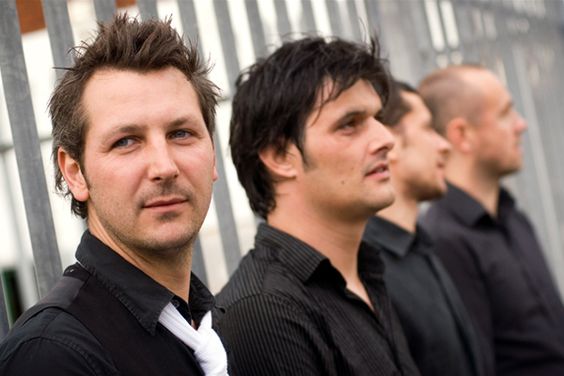 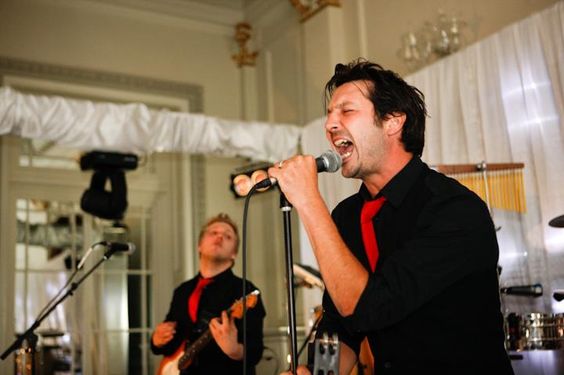 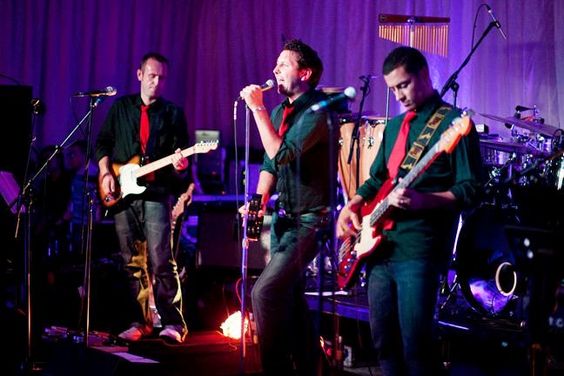 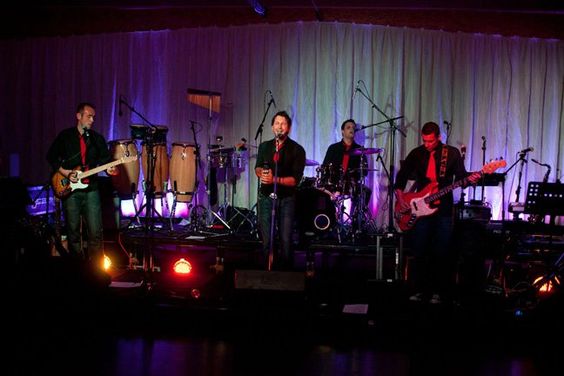 ‘Thank you so much guys, you absolutely made the day!’

‘I’d recommend this band to anyone – this really kicked our guests into action – I thought after our long conference they’d be all falling off their chairs in boredom but I’ve never seen them go so crazy! ‘

‘Thank you so much – the band were fantastic. I LOVE indie and rock, and so now does everyone else it seems! I loved the lead singers edge on stage – what a born-to-be-rock-star!! ‘

“Very good band with a great sound. They will go far.”

“A killer live sound and four part harmonies- these guys are seriously good.”

“I just wanted to say how great everyone was last night – the band a huge hit!”

“Thank you, the event went well! The feedback has been very positive, so thanks to all. I have to say that all of them are extremely polite and pleasant people to deal with and that it was a great pleasure to take care of them.”

“…..we just wanted to feedback how amazing we thought 21st Century Riot were when they played at our Post Wedding Party last night. Their version of Elbow’s ‘One Day Like This’ for our first dance was so special, totally brilliant and we loved it. The rest of the songs throughout the evening were just as great and we loved them all, a great mix of oldies and newbies. We have had so much positive feedback from our guests, from young to old everyone has commented on how great the band was, even the hotel bar staff said how good they were and that they were one of the best bands they had seen. The evening flew by and we just wish they could have played all night too and we would definitely book them again if we get an excuse. Many thanks to all of the band members and to yourself for making the whole process, from start to finish, go so smoothly and for being so helpful and flexible, really nice bunch of guys :)”

“We would very much like to thank the band members for their contribution to the celebration. The music was enjoyed by all and helped make our day. A very professional approach and a very nice bunch of guys. Loved the music! Thanks again.”

“…..I just wanted to say a big THANK YOU to the band for a fabulous performance at our 50th Birthday celebrations! We thought they were brilliant and we’ve had fantastic feedback from our guests who all really enjoyed their performance and raved about them and they kept the dance floor filled until the last minute. We didn’t want music that was going to make us feel “old” and they had just the right mix of current, classic and a few oldies for the occasion. They were very professional and efficient and just arrived and got on with setting up so they were ready before everyone arrived. Jay was brilliant and stayed as late as he possibly could to keep the music going after the band had packed up. The guests were still begging for more as he left! They seemed a thoroughly pleasant bunch of guys who certainly made us feel they were enjoying the gig as much as we were. Thank you.”

“The guys were brilliant. They effortlessly arrived, got everything set up, queued up the playlists, started no problems, rocked the joint, played a few extra numbers, allowed some of the gang rap on their equipment (!) and were a huge hit with the guests. We were really impressed with how tight the band was, the breath of the repertoire and the real energy they put into it. Thanks again for all your work in the run up and for helping making it a great night.”

“Regarding 21st Century Riot, our feedback is all very positive. The band were fantastic live- whilst the video on-line was good, it doesn’t really do them justice. The quality of the sound & their performance was excellent. Their choice of songs was also just right, as was their interaction with our (occasionally slightly mad & inebriated) guests! They got everyone dancing and created a great atmosphere. Probably the best sign is that many people (including the discerning music lovers amongst the guests) told me later how much they had enjoyed the music & asked me who the band was/ how I had found them…..”

“Just a quick note to thank you for the effort you put into arranging for Saturday just gone and a huge thank you to the band members who were absolutely fantastic. Everybody had a great night. Thanks again.”

“We wanted to thank the band for their amazing performance at my party last month. They arrived early so there was plenty of time to set up and give us the chance to say hi before we got ready at home. We wanted the sound level set so people could still chat in the corners and your sound engineer was very helpful in respecting our wishes. The music was outstanding! Loads of people were giving compliments on the night and we’ve had lots of phone calls too, saying how much everyone loved the sound and authenticity of the band. We spend the whole evening dancing and the party was still going strong right up until the end. We were delighted with the playlist and found your communication beforehand very helpful in selecting the music. The ipod sets too were great – all my favourite songs one after the other. And the lighting made the room look lovely. All in all, the band made the evening a true success, thanks!”

“Just to let you know how WICKED 21st Century Riot were yesterday… They were such a nice bunch of boys and performed so well, were entertaining and super professional. I would recommend them to anyone and will so. Hope to be able to use them again soon, thanks for everything.”

“…..21st Century Riot were simply awesome. They hit all the notes, played some of the best contemporary songs and did justice to some old rock classics. Sound quality excellent.”

“The day went very well and we were both delighted with everything, including 21st Century Riot. Many of our guests commented how good they were. One couple at our bash had met 47 years ago (on the 19th June) and their first dance had been Walk the Dog by the Stones. The band were asked if they could play it which they could not – at the time they were asked. The band went for their break and, when they came back, they had learnt it. The band played the song and the couple did the very dance that they had 47 years previously – what a fantastic thing for them to have done. It made such an impact and the band have my utmost respect for going out of their way to make it happen. The guys were absolute stars.”

“I just wanted to say thanks so much, firstly for persuading me to go with it, and of course to the guys for a truly amazing performance. They really were absolutely superb, fantastic performance but also so very professional and got it just right, you could see the sound, lights, mood and everything was being tweaked all the time. I was so worried we’d gone a bit long for such a small do, but they were totally relaxed and played brilliantly, they were perfect for us, they even looked like they were enjoying themselves 🙂 At one point I looked up to see the whole place literally jumping up and down. It was certainly a rocking night and one to remember. So, a heartfelt thank you, and if you’re planning any public gigs please do let me know as we’d love to see them again.”

“21st Century Riot were fantastic!! Please pass on my thanks to them. I have had lots of positive feedback from people over the last couple of days. Everyone thought they were brilliant. I can only say that from my end, things went very smoothly. I didn’t notice that there were any issues with setting up, timing etc. they were great. Thanks again.”

“I spent wonderful time with guys – the show was very-very positive and the customer is really satisfied.”

“We were very pleased with 21st Century Riot’s performance. I was nervous of being in charge of booking the band for an important corporate event but they were brilliant and everyone enjoyed the performance. I was very happy with the services provided by the band. I have had lots of positive feedback on their performance from our guests. We are very pleased with how our event went and would be happy to use the band again in the future.”

“The band ROCKED! Absolutely top notch. Sounded great. Looked great. Was a huge contributor to the successful party and need to make sure they stick together as they are playing at my 50th again 🙂 Thanks for organizing, and please make sure the band gets the above feedback!!”